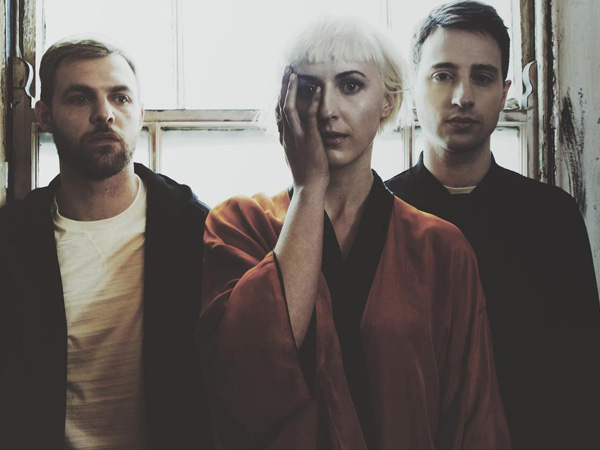 Once known as the hottest unsigned band in the UK, Vaults are a dramatic pop trio from London.

They recently released their hit debut album, “Caught in still life.” You might recognise them from John Lewis’s iconic 2016 Christmas advert or from their hit tracks, Midnight River, Cry no More, Premonitions, Lifespan and cover, One Day I’ll Fly Away.

The three songs, cry no more, premonitions and lifespan have collectively been streamed more than 1.5 million times.

Such are the leaps and bounds of Vaults. The London trio have shot from being the hottest unsigned band in the UK — courtesy of a Number One Hype Machine slot — to acclaimed performances at Latitude and Reading/Leeds festivals, selling out the Village Underground in London, a US tour that included gigs at CMJ and BBC Introducing in New York, a tour with Paolo Nutini, and the promise of one of the most keenly anticipated debut albums of 2016.

Ben is classically trained and an experienced session guitarist. Barney is a production genius and arranger who, with Ben, has composed scores for short films and documentaries. Blythe studied drama at Bristol University, cut her teeth in street theatre, worked in the care sector using singing as a therapeutic teaching aid for children and adults with learning disabilities, and fronted “whimsical,” histrionically costumed in folkish outfits on the London pub circuit. As kaleidoscopic creative backgrounds go, those of the members of Vaults take some beating.

Collectively the newly-formed trio are even more special. College friends Ben and Barney introduced themselves to Blythe after one of her dramatic performances at Islington theatre-pub The King’s Head. And straight out of the gate Vaults found magic.

“We already had the song ‘Vultures,'” Ben of a song he wrote by drawing on a deeply personal, painful experience. The sound and feel of that song — piano-built electronica, emotive, filled with imagery like “vultures circling my heart” and “jealousy it creeps, poisoning my words” — would become “fundamental” to Vaults’ future sound. The passion Ben poured into creating the song is the same passion that radiates from everything Vaults do. “It’s a big part of what made us,” he acknowledges, “what established our sound, what made the band what it is.”

That vision was only realized once Blythe applied her stunning vocals to Ben’s adroit writing and Barney’s inventive production.

“I definitely had an interest in doing more electronic music,” says Blythe. “I’ve always been someone who did a lot of different stuff, so I liked the idea of focusing on something. And I was really tired of living and working in London and slogging away on a shoestring. I was working three jobs, trying to do music while cycling around everywhere ’cause I didn’t even have enough money to get on public transport. When you’re in that mindset you don’t necessarily know what’s going on.

“So it was a bit of a shock to meet Ben and Barney,” smiles this charismatic frontwoman, “start making music and almost immediately get a lot of attention. But we were just following our instincts. I sang on ‘Vultures’ and when we sat back and listened to it, it felt like there was something special there.”

So far, so intuitively good. The newcomers were determined to first bottle that spark, then do things differently, on their terms, at their pace. So Vaults bunkered themselves in their home studios and worked on their songs and their sound. They created a minimal webpage and sent three songs to three management companies. One, Three Six Zero, was instantly enthusiastic. This was electronic music of a very different stripe from their other notable clients, Calvin Harris, Frank Ocean and Slaves.

“Cry No More” was “the first time we had a tune that finished itself,” notes Barney and at the end of 2013 Vaults had put it up as their first track online. Rippling, almost-Italo-house piano mixes with allophone (aluminium, bell-like version of a gamelan), techno drones, beautiful strings and another powerfully soulful vocal from Blythe.

“It was quite an unusual song,” admits Ben, “but one that everyone latched on to as soon as they heard it. It got 100,000 plays in seven days or something. We gave it to this guy who sent it to three or four blogs. He told us not to get too excited. But then it just spread and spread, and all the other blogs picked up on it.”

“Having a theatre background,” she notes, “it’s ended up that I’ve become a bit more involved with the visuals. Also, because I’m the frontwoman, a lot of the questions as to what I’m willing to do come from me. The idea of me pulling some rocks in a harness, like I do in the ‘Premonitions’ film, is easy for me to come up with. I don’t know how I’d feel if the guys came up with that!” she laughs.

Beyond videos, Vaults say that imagery is a cornerstone of who they are as a band, and in fact fed into their signing last year to Virgin/EMI.

“I write a lot of the songs to visuals, to weird short films and stuff,” says Ben. “I just find it a lot easier to write when you’re looking at something. Even from the point where it’s just a drumbeat, I’ll loop a short film. And when we first signed with the label, we gave them a PDF of loads of photography we found by Gregory Crewdson and film references to give a sense of the stylistic things we liked. Even when we only had four songs, that was a big part of it.”

Vaults have spent the last 12 months in small studios in Dalston and Barnsbury, working on their debut album. They’ve done it mostly themselves, albeit with the addition of strings players (on arrangements scored by Barney) and the outsourcing of mixing to David Wrench, acclaimed for his work with Jamie XX, FKA Twigs, Bat For Lashes and Jungle. Already in the bag: their next single, “Midnight River.”

“It’s forced its way into being the next single,” says Barney.

“We’ve played it live,” adds Ben, “and by the time of the third chorus everyone is singing along — the reaction is like they’ve heard this tune a hundred times.”

Meanwhile Vaults, keen to let the songs and the films do much of the talking, aren’t rushing to push or over-promote themselves. There have been trips to America, where the band signed their publishing deal, and their performance at London’s Village Underground. “The Greek chorus style backing vocalists,” choreographed dancers strings and stage make-up (on Blythe, not the guys) offers a window into this ambitious band’s all-round vision for the music, the art, they want to make.

For Blythe, her experience of teaching music in the mental health sector only feeds into her onstage persona.

“I’m half-bonkers anyway” she cheerfully admits. “And when you’ve worked in that world, it just makes you realize that everyone’s on a scale of mental health issues,” the singer theorizes. “That makes you a lot more empathetic to an audience.”

Blythe is upfront and engaged in other ways, too. “I am extremely sex positive and body positive,” states this unique front woman. “I recently contributed to a C4 doc about fetishes and have written for Huffington Post about my campaign against the ‘beach body ready’ meme. I’m currently in a polyamorous relationship style and my explorations into group sex and multiple relationships all feed into my art and performance too. All this is politically aware” she insists passionately. “I don’t hide it, I believe in it, and it is part of the importance of equality and self-learning in my life.”

This brings us, in a way, to that “sky-high in a Sadomasochists hand-glider.” Barely one year after they formed, Vaults were approached by the producers of “50 Shades Of Grey.” Did they have any songs to contribute to the soundtrack of the blockbuster film of the bonkbuster book?

Always open to artistic connection, however seemingly improbable (they’re a careful, thoughtful, artful band, but not a precious one), the trio sat down with the director, artist-turned-filmmaker Sam Taylor-Johnson.

“They showed us the scene, promised us it wouldn’t be shit, so we let them have ‘One Last Night,'” shrugs Ben.

“We knew about her art, and we loved [her John Lennon biopic] ‘Nowhere Boy,’ so we felt pretty good about it,” nods Barney.

“And that film got us a worldwide fanbase that we never would have had before,” acknowledges Pepino, “there’s no two ways about it.”

Cue 30 million streams, tens of thousands of new Facebook fans from all over the world, homemade fan versions of the song from every corner of the world, and Baltic state audience mania.

“We just went to Lithuania and people were singing all the lyrics back to us!” laughs Blythe. “Maybe it’s because our music’s in the only scene in the film where they’re happy, and not having sex, or playing with tampons…”

“That’s ’cause they’re in a glider,” points out Ben.

But those are conversations for another day. For now, Vaults will keep all the kinks, quirks and sensuality in their stunning music.