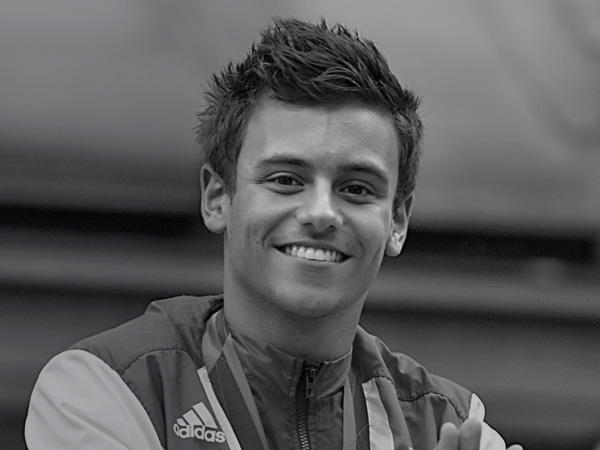 One of the most recognised figures in world diving thanks to the incredible achievements he made as such a young competitor. Tom Daley first made a name for himself when he won the European 10m platform gold as a 13-year-old in 2008; reaching the Olympic final at 2008’s Beijing Summer Olympics, where he ultimately finished seventh, to become Britain’s second youngest male Olympian of all time.

Since winning a bronze medal at London 2012 in the 10m Olympic platform event after a nail biting final round, Tom has been named BBC Young Personality of the Year three times and is now recognised as one of the sports best loved personalities in the UK.

For the 2016 season Tom was paired with Daniel Goodfellow for the 10m men’s platform synchro competition. The pair won bronze at the 2016 FINA Diving World Cup earning them a spot at the 10m synchro competition at the Olympic Games, where the pair subsequently went on to win an Olympic Bronze Medal.

Tom is available as motivational sports speaker, for Q&A interviews and for Awards Ceremonies.

Following up this triumph by reaching the Olympic Final on his debut at Beijing 2008, Tom became Great Britain’s first individual World Championship gold medallist, winning the 10m platform in Rome the ensuing season.

In 2010 Tom continued on his path to success at the Commonwealth Games in Delhi, where he collected double gold for 10m platform and 10m Synchro and then, two years later in 2012, he won the overall FINA World Series title, alongside his second European gold, before qualifying for London 2012 with gold at the British Gas Diving Championships in Sheffield. Post London 2012, Tom’s success and popularity went from strength to strength. Scooping a bronze medal in the 10m Olympic platform event after a nail biting final round, he has since been named BBC Young Personality of the Year three times and is now recognised as one of the sports best loved personalities, presenting ITV’s celebrity diving show Splash! to an audience who welcomed his friendly nature and warm hearted personality.

Tom continued to compete alongside his presenting commitments and in 2013 defended his British title: winning a World Series Gold in Edinburgh and reaching the 10m platform final at his third World Championships where he finished 6th.

2014 saw Tom continue to collect international medals, including silver and bronze in the World Series, before he defended the individual Commonwealth 10m platform title in Glasgow. He went on to win silver in the same event at the European Championships in Berlin.

Tom started 2015 winning the individual 10m platform at the British Championships, before winning bronze at the World Championships in Russia later that year.