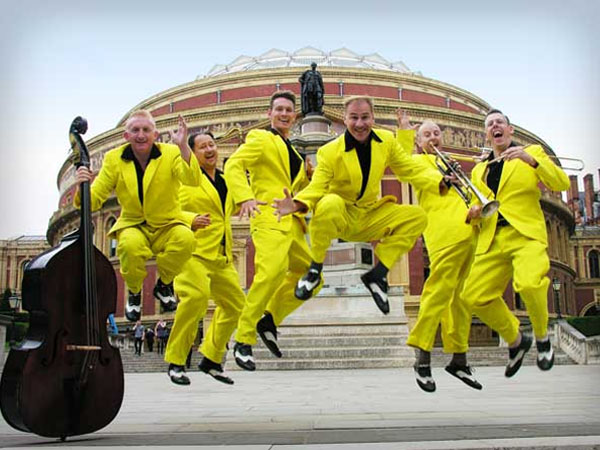 With a mixture of high energy danceable music, bright suits, incredible live show and irresistible humour, the Jive Aces will quickly get any audience on their feet; every show is guaranteed to go with a swing!

Having become the first ever band to reach the semi-finals of Britain’s Got Talent in 2012, following up with a performance for Her Majesty The Queen as part of the Diamond Jubilee celebrations and performances for both the Olympic and Paralympic celebrations, The Jive Aces have truly established themselves as the UK’s top Jive & Swing band.

Together for over a decade, The Jive Aces have performed at thousands of festivals, theatres and events throughout the UK, Europe and USA, as well as Japan, Israel, South Africa, Morocco and the Caribbean, 30 countries in all. The Jive Aces are renowned for their high energy Jump Jive music (the exciting sound where Swing meets Rock ‘n Roll) and spectacular stage show. They combine a mixture of fresh arrangements of swing/Jive/R&B classics – songs made famous by such greats as Louis Prima, Cab Calloway, Bobby Darin, Louis Armstrong, Dean Martin, Big Joe Turner and Sammy Davis Jnr – along with a selection of superb swinging originals taken from their studio albums.

The Jive Aces were the recipients of the prestigious “City of Derry International Music Award” in 2006, previous recipients being Van Morrison and Jools Holland. They also received in 2008 a special award from the Variety Club of Great Britain for their contributions to entertainment and charity. The band has been featured on hundreds of TV and radio shows, most recently they are featured playing live every Wednesday night on BBC Radio London’s “Late Nights” show with Jo Good. Other appearances include CNN; ABC’s “Good Morning Los Angeles”; Channel 4’s “Holy Smoke”; BBC Radio 2; DNA Stories; Wakey, Wakey Campers; JazzFM; “A Swingin’ Christmas” (one-hour PBS Special); an eight week residency the hit Italian show “Niente Popo Dimenoche”; BBC1 TV for “Children in Need”, and many more.

The band has released seven studio albums, one dance compilation and also a skiffle E.P.. Their latest “King of the Swingers: A Salute to Louis Prima” features guest appearances from Kenny Ball, Ray Gelato, Toni Elizabeth Prima and more and is on the Golden Age Recordings label. With their high energy music, bright stage suits, wild stage show, irresistible humor and sheer professionalism, the Jive Aces will quickly get any audience on their feet – or dancing in their seat! Each and every show is guaranteed to go with a swing!