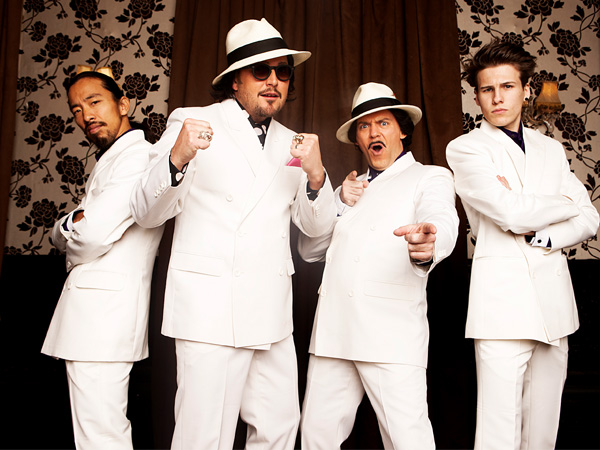 The Cuban Brothers combine music with jaw-dropping b-boy dance moves and riotous comedy. Born of the loins of seventies Havana nurtured on a diet of soulful tunes their fresh approach to live entertainment whips up frenzy at every gig.

The three amigos are a great option to follow a headliner and keep the party going or kick off the musical entertainment and warm up the crowd. Alternatively let them take control and lead your guests into a whirlwind of Cuban historical fact and mythology with some heavy beats and dangerously cool threads.

The entertainment of choice for Elton John and Richard Branson, the trio has toured the world 20 times over.

Mike Keat’s (Miguel) love of b-boying, Latin music and character comedy inspired him to create a fun, irreverent music-driven show to help him showcase his burgeoning talents as a singer, MC and dancer. After enrolling Archie ‘Archerio’ Easton (a former champion b-boy and ex-Prodigy dancer) and Kengo ‘Kengo San’ Oshima (a dance student and earnest wrong-man) the trio was complete.

Their residency at Rob da Bank’s celebrated Sunday Best parties led to The Cuban Brothers compering and hosting the main stage at Bestival since its inception in 2004 to the present day.

In the world of cinema Mike has recently acted in Plan B’s Ill Manors and Dexter Fletcher’s Sunshine on Leith, while the band have completed filming Nick Frost’s next film Cuban Fury. As hosts of the Gumball Rally for several years, the boys also starred in the seminal movie Gumball 3000 introducing them to millions as the main comedy element in the movie. Starring with Fatima Whitbread on Let’s Dance for Sport Relief and high profile roles in Sky TV’s cult hit Pineapple Dance Studios the BBC’s No Hats No Trainers, a visual mixtape of everything cool took them to a whole new generation, TV specials for Snowbombing and Bestival and various talking heads programmes have kept Los Hermanos ‘on the box’, so to speak.

Future plans include the Cuban’s comedy road movie ‘It’s A Long Way’, shot in Australia in 12 days and 100% improvised in the form of script and action. Already causing plenty of excitement it features Mike Keat as yet another alter-ego, Barry Peters, on a pilgrimage to original AC / DC vocalist Bon Scott’s grave in Freemantle Western Australia.