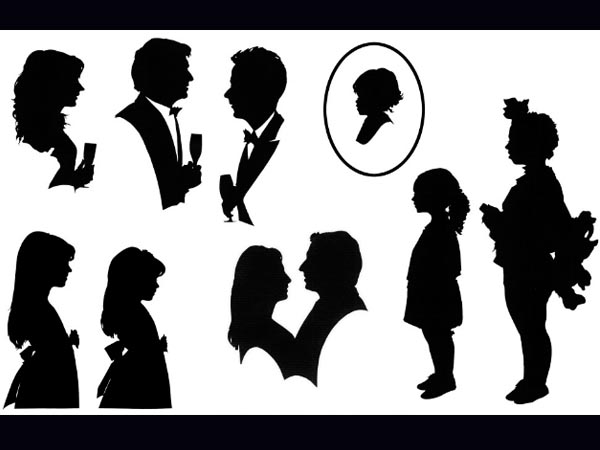 The Silhouette Artists cut unique, 90 second freehand portrait silhouettes from black paper, using just a pair of scissors and a technique called Cut & Hope! This is truly eye-catching entertainment for corporate and private events, trade-fairs, weddings and other parties.

For the un-initiated, silhouette cutting is an extraordinary miracle of hand-eye co-ordination that most people simply don’t believe is possible; the silhouettist chooses a subject, takes a pair of scissors & some black paper, and cuts them out!

In return their chosen subject will receive a beautifully crafted cameo portrait of themselves, mounted onto a printed card.

In his long career as a silhouette artist Charles has cut many notable portraits, including two silhouettes of the Queen. He is the UK’s busiest silhouette artist, working at a huge variety of events at home and overseas.

On leaving art college he worked for many years as a street artist in London’s Covent Garden. He started by drawing 10-minute portraits in pencil and later began cutting silhouettes. He moved naturally from Covent Garden into corporate events, where he found a very different audience to the world of fine art.

In his long career he has appeared at all kinds of venues and cut over 150,000 profiles, including two portraits of the Queen, the Duke of Edinburgh, President Clinton (while visiting the National Portrait Gallery) and a ever-growing number of TV personalities, writers, artists and sporting celebrities.

Charles currently lives with his family in Reading, where he has converted a small eighteenth-century barn for use as a painting studio. Mays Barn doubles as an ad-hoc gallery and is opened to the public on various occasions each year.