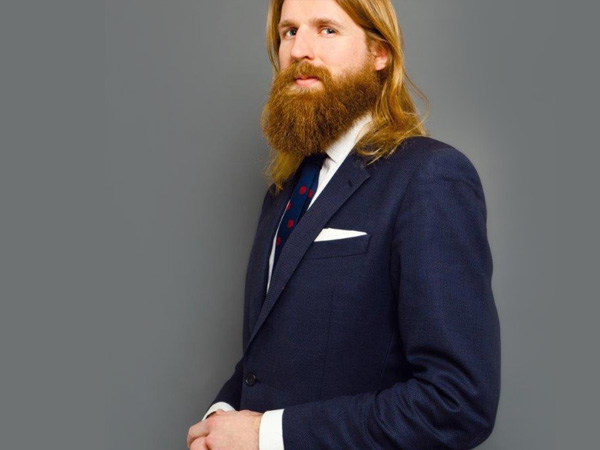 Do not miss the opportunity to work with this man. Sanderson isn’t your normal comedian, he knows about how to start a business from scratch and all that goes into it, he also researches his audience before the event and builds there online profiles into his routine (something which developed off the back of him selling his tickets by hand!)  So his comedy is multifaceted, a bit inspirational, interactive, and not to mention eye wateringly funny.

In order to accommodate such a vast array of talents, Sanderson can be booked in several capacities. He can be booked as a comedian, a business speaker or as a representative of the Sunday Assembly. All three of his acts combine his unique wit and hilarious approach to any given situation.

Jones’ cocktail of talents means he flourishes at a wide range of events – conferences, away days and award ceremonies – for a variety of sectors including:

The friendly funnyman with the uplifting tale will bring a smile to any event, business or otherwise. People are endlessly fascinated by themselves, and with a bespoke, personalized performance your event will live long in the memory.

In 2008 Sanderson Jones left his job as an advertising salesman to become a stand up. In 2012 he sold out the Sydney Opera House.  Incredibly, he did this by selling every single ticket to the show by hand.  What’s more, the technology loving geek researched the audience and incorporated their online lives into his show.

In January 2013 Sanderson, alongside comedian Pippa Evans, started up a non-religious church called the Sunday Assembly, it celebrated life through talks, comedy and songs. The concept went viral and there are now 28 Assemblies across the world. They started a global movement within a year and it is now even included in the GCSE syllabus for Religious Education! Earlier this year Sanderson talked on BBC Radio 4 about the phenomenon of ‘swapping Psalms for pop songs’.

After a sold out run at the Edinburgh Fringe, Jones took The Comedy Sale to prestigious venues across the UK and Australia such as the Union Chapel, the National Theatre and Adelaide Town Hall. Recognition includes a nomination for the Malcolm Hardee Award in 2011 and a nomination for the Chortle Award for Innovation in 2012.

Prior to comedy he sold advertising at The Economist, where he was seconded to their digital skunkworks Project Red Stripe as a digital creative, before choosing the world of stand up over online start ups.  Prior to that he worked as a door-to-door salesman in Paris. From 2009-2011 Jones was the film critic for the The Lady magazine (he knows his CV makes no sense).

The night was awesome. It is the second time that Sanderson has hosted the awards and he definitely helped to pull off the ‘Do Different’ theme once again. It felt like a completely new show and as fresh as ever. The karaoke moments went down really well and a great night was had by all.”

Sanderson was one of biggest highlights we have had at our events. He had an excellent rapport with the audience and added some well placed wit that immensely livened up the atmosphere with a talk that was not only entertaining but very insightful. I would highly recommend him and look forward to working with him again.

Sanderson did his homework and really pulled together a hilarious presentation. It was the right balance of roasting as well as recognition. Love as well as laughter. He totally ‘got’ my husband’s personality and everyone really enjoyed themselves…most of all our Birthday boy.

Please pass our grateful thanks onto Sanderson. He was really brilliant and I think it will be very hard to top for next year!! He gauged the content just right, really commanded the audience and kept the flow of the evening going with bags of energy throughout. The level of research was apparent, very apparent.

Sanderson was fantastic, extremely professional, polite and friendly; it was a true pleasure to meet/work with him. He was well received by the audience, very funny and anecdotal. He arrived promptly and was well prepared. Sanderson added value to our event. We are looking forward to working with him in the future – [a] massive thank you from the Directors and Staff at Novosco.

[Sanderson is] the best stand up I have ever seen at an awards show! #dcsawards

@sandersonjones It’s not easy to be insightful and entertaining at the same time! Thanks for your #HNLondon talk.

Sanderson was a pleasure to work with and a true professional. In our pre-briefing conversations, he was very easy to work with and quick to understand what we wanted from him as a moderator and from the seminar itself. He was also proactive in contributing ideas too – which we welcomed. He added the humour to the debate we were after but also kept it moving at a good pace and drew out the objectives we wanted.