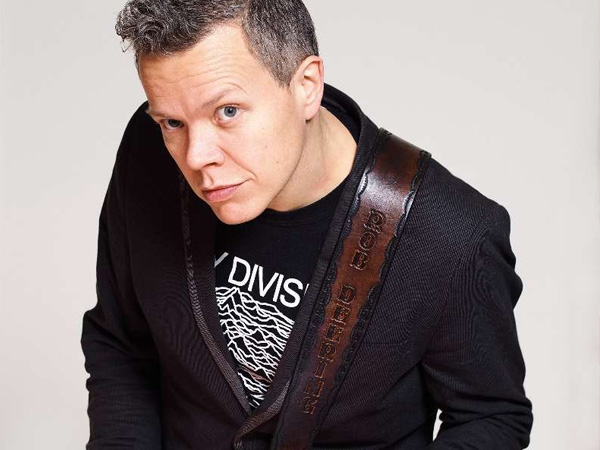 Rob combines his brand of witty comedy with impressive guitar skills and some very clever loop layering. He’s like a one-man rock band with jokes! Perfect for your after-dinner entertainment.

Perhaps you know him from one of his myriad appearances in clubs, theatres and festivals throughout the known world, or from a TV or radio near you.

” As sharp and versatile as a Swiss Army knife, Rob Deering is one of the best performers on the circuit ” – The Independent

He has hosted The Comedy Club on BBC Radio 4 Extra as well as appearing on Pointless Celebrities (BBC One) with Lucy Porter and winning Celebrity Mastermind (BBC One). He also won a special comedian’s edition of The Weakest Link – Rob is the only person ever to have won without getting a question wrong!

Rob is a regular contributor to Steve Lamacq’s Roundtable on BBC Radio 6 Music. His other credits include Comedy Rocks With Jason Manford (ITV), Celebrity Total Wipeout (BBC One) and 99 Things To Do Before You Die (Channel 5). As well as touring the UK with his critically acclaimed solo shows, Rob is in high demand as a corporate performer and as a headliner at comedy clubs around the country.

He’s performed at a number of festivals including the Edinburgh Fringe, the Udderbelly Festival on London’s Southbank. the Green Man Festival, Camp Bestival and Latitude – his late-night live-music comedy pop quiz Beat This is a festival institution. Rob is a prolific runner – he has completed seven marathons and has a regular podcast, Running Commentary, with fellow comedian Paul Tonkinson in which they talk about life, and running, as well as interviewing celebrities and other interesting characters – all of course whilst running.

” As sharp and versatile as a Swiss Army knife, Rob Deering is one of the best performers on the circuit ” – The Independent