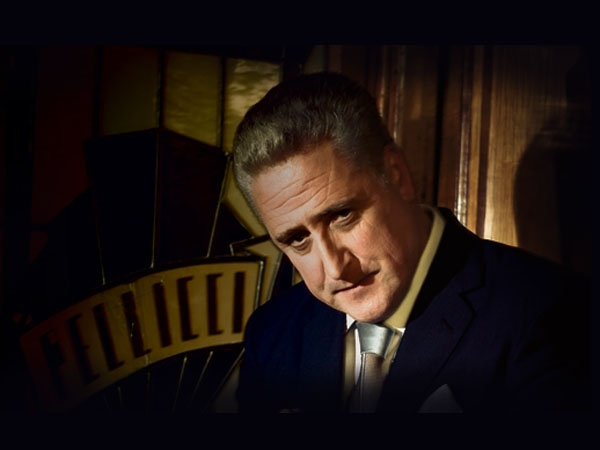 He is an internationally renowned Swing performer with amazing tunes, storming jazz sax solos and an unmistakable, distinct voice. His name is Ray Gelato, and he joins his legendary predecessors in continuing the trend of delivering the coolest swinging sounds around.

Expect to hear some footstompin’ big band tunes that are guaranteed to have you jumpin’ and jivin’ and leave you feeling uplifted and inspired – a selection of truly Classic records as well as Ray’s original material!

Ray’s father was probably his first musical influence. A US airman, living in London, Ray’s dad had brought over a huge collection of great records. Young Gelato remembers hearing Sammy Davis, Dean Martin, Bill Haley, and many more, being played around the home, while he was growing up. This Love of music developed further when Ray was a teenager. Most nights, Ray could be found at Londons best Rock n Roll clubs, R n B venues and live gigs. Discovering the sounds of Louis Jordan and Louis Prima, among many other legendary entertainers, who would later be huge influences on Ray’s music.

In 1979, Ray took up tenor sax. Studying hard at night school and with private tutors, he developed a life-long love of jazz tenor sax playing. He was introduced to such sax greats as, Coleman Hawkins, Lester Young, Illinois Jacquet, Ben Webster, etc. These masters became big influences on Gelato’s sax playing. Around this time, Ray would ask to sit in with any live band that would let him. It was here that he realised that music was to be his life.

1982 saw the birth of The Chevalier Brothers with Maurice Chevalier, and remained Ray’s band until 1988.  After winning a talent contest at London’s Camden Palace (the first time Ray was featured as lead vocalist), the band became the “darlings of the London club scene.”  With the help of Ray’s long-time buddy and bass player, who became known as Clark Kent, The Chevalier Brothers pioneered a revival of interest in the swinging music of the ’40s and ’50s.

They were a huge hit in clubs across the U.K., toured Europe and Japan, and were featured on numerous TV shows.  They also released three albums and several singles, and had the opportunity to work with such legendary performers as Slim Gaillard.  At the band’s peek, they were playing around 200 gigs a year!  The musicians included: Ray Gelato (tenor sax, vocal), Maurice Chevalier (guitar), Clark Kent (bass), John Piper (drums) and Roger Beaujolais (vibes).

In 1988, Ray appeared playing and singing in the hit British film, Scandal. That same year, he formed Ray Gelato and the Giants of Jive.  This bigger, seven-piece band was the prototype of the winning formula Ray uses today.  Their extensive list of gigs included shows at Carnegie Hall, the Nice Jazz Festival, the Lugano Jazz Festival and many tours throughout the U.K. and Europe.  The group also recorded three CDs before disbanding in 1994.

In 1994, Ray found more film work, performing on the soundtrack for the BBC drama, No Bananas.  That same year, he formed The Ray Gelato Giants, with whom he still performs today.  This highly successful combination has played to critical acclaim wherever they have appeared, including the Umbria Jazz Festival in Italy (four times), the Montreal Jazz Festival, San Sebastian Jazz Festival (Spain), and concerts in New York City, Philadelphia, Tampa, Chicago, Washington D.C., and Los Angeles.  The band has also enjoyed numerous Italian tours and television appearances, including a spot on the Mauritzio Costanzo show.  Closer to home, Ray and the boys have played Ronnie Scotts to rave reviews (see reviews), Pizza on the Park, and consistently packed the house at The 100 Club in London.

Ray has scooped a number of awards and nominations including Ronnie Scott’s Best Male Vocalist, BBC Jazz Artist Of The Year and BBC Radio 2 Jazz Artist Of The Year. With performances all over the world, he’s performed twice for HM the Queen, opened for Robbie Williams at The Royal Albert Hall and played private appearances for the likes of Richard Branson, Elle McPherson and at Paul McCartney’s wedding. Ray and his spectacular band The Giants have also performed at the Proms in the Park, the BBC’s VE Day Concert in Trafalgar, on Strictly Come Dancing and This Morning. Ray has also been a featured guest on such radio shows as, Paul Ross, Danny Baker, and Robert Elms