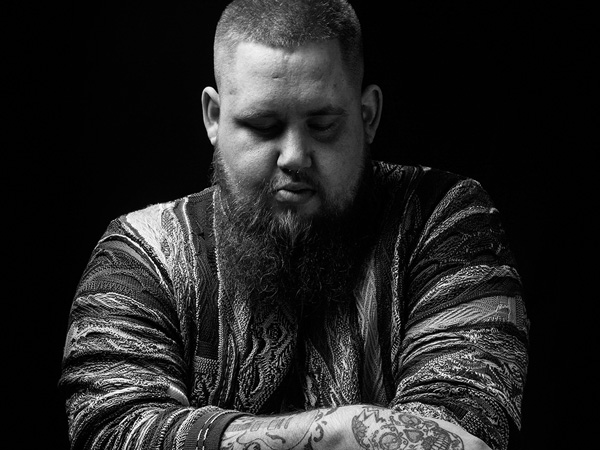 Singer, Rag n Bone Man (Rory Graham) has injected an exciting new twist into the blues music he once grew up with and his unique sound and style has already made a big impact in 2017, scooping up the British Breakthrough Act award at the Brit Awards as well as being announced as the winner of the prestigious Brits Critics Choice award.

Having already sold over 117’000 copies of his number 1 album Human, 2017 looks to be a stellar and very busy year for the artist with near non-stop touring until Autumn.

“Heartbreak’s pretty widespread, innit?” quips the prodigiously talented Rory Graham, nascent star-in-waiting Rag‘n’Bone Man, with a mischievous grin. Graham has injected an exciting new twist into the blues music he grew up with in his parental home in East Sussex bringing it bang up to date using the beats and production methods of contemporary hip hop. Equally he resurrects age-old themes of loss and romantic pain with a voice so immediate, raw and expressive that it transfixes anyone in earshot with its sheer size and elemental power.

In person, Graham is the dictionary definition of a gentle giant. His appearance suggests one serious dude. He’s a big man, bearded and with tattoos, but instead of Hate and Love, he has the words Soul and Funk inked across his knuckles. “I could’ve had Drum and Bass,” he jokes, in his warm, softly spoken manner, “or maybe Jungle across both hands”.

When Rory sings, he connects with people on a level far from everyday banter. Onstage at his sold out Village Underground show in June ’16 his voice by turns silenced the room and brought it to fever pitch. During quieter songs, as his vast, soulful growl filled the venue, there were people literally crying. His unique delivery of often very personal songs has that effect on people, rare in today’s pop, something that can’t be taught in stage academies by vocal trainers. Rory has spent fifteen years learning to flex his considerable vocal muscles alone, using his own instincts and shaping his life experiences into stories that stretch those.

Growing up in Uckfield, 20 miles inland from Brighton, music was always the main focus of Graham’s parental home. His father played guitar, his mum sang (both recreationally), and there would otherwise always be records playing. “My dad was super into blues, and also rock crossover stuff like JJ Cale,” he recalls. “There was also lots of reggae, like Peter Tosh, which eventually got me into the soundclash stuff, and jungle”.

At the age of 15, he MC’d with a drum ‘n’ bass crew, using the handle Rag ‘N’ Bonez, inspired by watching re-runs of ’70s Brit sitcom, ‘Steptoe And Son’. With little else to do in their backwater hometown, the crew jumped the airwaves via their own pirate radio station, but Graham soon realised he’d have to move to Brighton if he was going to get anywhere with music.

After testing out his rap skills athip hop open-mic nights there and bingeing on UK home grown Hip Hop artists like Roots Manuva, he started shuttling up to London to a night at Brixton’s Jamm venue called Slipjam B. There, he hooked up with a couple of performers, Gizmo and DJ Direct, and they formed a crew called The Rum Committee. Over the ensuing few years, they’d support old-skool hip hop luminaries Pharoahe Monch and KRS-One at Brighton’s Concorde 2, and release their own album through Bandcamp, through which Rory learnt the rudiments of recording.

Parallel to all this, in private, he worked at his potential as a singer. At 19, his dad had coaxed him up to the mic at a blues jam in a local pub. “Afterwards,” he recalls, “this old geezer came up to me and said, ‘Dude, your voice is insane, you should sing some more’. That feeling of actually getting a reaction had a big effect – ‘Oh, I like this is – this is good!’”

At the beginning, there was a rather divergent progression between his ruffian rhyming in Rum Committee, and his ‘proper’ singing, which was informed more by his dad’s old blues records. “I’d found my voice through that style of music,” he reasons, “so instantly when I started trying to write my own music, it all sounded very like Muddy Waters, because that’s the stuff I’d grown up with”. He smiles, and adds: “Blues is infectious. No-one’s ever listened to blues, and gone, ‘Nah, don’t like that’, know what I mean? Nobody’s ever listened to BB King and gone, ‘That’s shit’. They haven’t – and if you did, you’re a mug!”

Graham duly self-released an EP called ‘Blues Town’. “My voice didn’t sound that great, and it was pretty badly recorded,” he admits, “but it surprisingly got a lot of love”. Doors started opening: he landed acoustic gigs, including one supporting Joan Armatrading at Brighton Dome.

Circa 2011, he got together with UK Hip Hop label High Focus releasing a couple more EP’s where his bluesy stylings were underpinned by the label’s trademark jazzy beats. He’d do gigs solo, with just a DJ backing him, but when he started working with producer Mark Crew Rory’s song-orientated fusion of blues and hip hop really developed. At the time Crew was working on Bastille’s debut album Bad Blood, on the basis of just a rough demo Crew landed Graham a publishing deal with Warner Chappell.

At Crew’s studio bunker in Battersea, they slowly pieced together another EP, 2014’s ‘Wolves’, whose towering ambition was best flagged by the fact that it eventually contained nine tracks – an album, in all but name. Crew’s robust beats echoed Graham’s predilection for jazzy hip hop giants Gang Starr, and guests included rapper Vince Staples, Stig Of The Dump, and Kate Tempest, whom Graham had befriended pre-Mercury award. Within the hip hop-y sound format, the song was paramount, giving Rory free rein to explore song structures, usually with an explosive chorus showcasing his mighty tonsils.

“There’s a lot of pain in the lyrics,” he reveals, “but it’s not always necessarily mine. It’s interesting to me, what’s going on in people’s lives. One night I was getting drunk with a mate, and we were having a proper deep and meaningful conversation, and he told me that his missus had made it so he wasn’t allowed to see his daughter anymore. I was like, ‘I can’t not write a song about this. So the next day I wrote ‘No Mother’. I find myself doing that a lot – something clicks in my head, like, ‘Right, that deserves something to be said about it!’”

Graham’s many talents – versatile songwriter, powerhouse singer, conduit for and conveyor of myriad human emotions – led Columbia Records to sign him on the strength of ‘Wolves’. For the ensuing ‘Disfigured’ EP (2015), he and Crew went for a more stripped-back sound, inspired by the spaciousness Rory heard in Al Green’s music, clearing the way for That Voice, without interfering clutter. “I remember thinking, ‘I can just do what I want now, so if I just do something that sounds good, I’m not gonna worry about what genre it is. That’s why there’s one track on there that sounds like Bon Iver, one that’s proper hardcore blues-rock, and one that’s more a hip hop/soul kind of sound. There’s nothing on there that sounds exactly the same as anything else.”

Lead track ‘Bitter End’, a tear-jerking realisation of a relationship’s demise, was staunchly supported then playlisted on BBC Radio 1 Xtra, and made it onto Radio One’s ‘In New Music We Trust’ playlist. On the back of the EP, Graham put together a Rag‘n’Bone Man live band, featuring a drummer, bassist, guitarist, keyboard player and backing singer. They toured the UK with hand-picked guests under the banner ‘Rag ‘N’ Bone Man Presents’, selling out shows up and down the country. They made quite a splash across Europe’s festival circuit, too, including Glastonbury, Eurosonic and Loveboxx, bringing fields and tents to a standstill, winning new disciples wherever they went.

In summer 2016, after a decade and a half of experimenting and learning, focusing and fine-tuning, Rag‘n’Bone Man is primed to become a household name. Rory has spent the winter hatching his debut full-length, partly with Mark Crew in Battersea, but also with other fresh producers. These include Two Inch Punch, aka Ben Ash, who has worked in a co-songwriter/producer capacity for Sam Smith, Jesse Ware and Damon Albarn’s Africa Express; and Jonny Coffer, another producer-cum-tunesmith whose CV ranges from Naughty Boy’s ‘La La La’ to tracks off the recent Beyoncé album.

As the album approaches completion, early tracks are sounding simply electrifying. As a teaser, Rory soft-released the song ‘Healed’, which was overseen by Cadenza (Lily Allen, Sean Paul), aka Oliver Rodigan, whose background as son of reggae DJ David Rodigan, chimed with Rory’s own. Its brass-assisted, slo-mo R&B-gospel vibe was concocted between London and Jamaica – a cultural collision, and a heartstring-tugging but quintessentially summery anthem.

During the painstaking process of assembling his all-important debut LP, Graham’s untetherable need to perform became so out of control, he took to turning up at open-mic nights, to ‘unleash the beast’ that is his tumultuous singing equipment.

Now, finally, the album’s lead single proper is ready for release: as an expression of mortal vulnerability, set to a stark chain-gang rhythm, it is almost impossible not to be moved, stopped dead in your tracks, by ‘Human’. Here is a song which fully encapsulates Graham’s peculiar contradictions: his strength and his gentleness, his staggering vocal mastery yet intuitive soulfulness, his wisdom beyond his tender years.

In a post-millennial culture where emerging talents are schooled from an increasingly young age, breeding a certain uniformity of phrasing and technique, Rag‘n’Bone Man arrives as an impulsive antidote, connecting with people on a more direct nigh on spiritual level. Still an obsessive consumer of music, Rory’s Everyman qualities reverberate in every note he sings.

As well as Soul and Funk, Rory has Star written all over him – an exceptionally warm and engaging guy with an astonishing natural gift. The world’s going to love getting to know him!