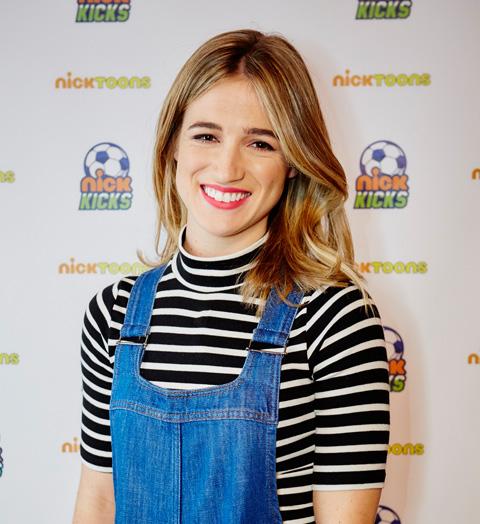 Rachel Stringer is one of the most exciting presenters to emerge in recent years. She is a regular reporter for BBC1’s flagship football programme Football Focus, interviewing some of the Premier League’s biggest stars. This follows making her debut on Match Of The Day for the BBC in 2015. In the same year she hosted MOTD Kickabout for CBBC and Kickabout+ an all-sports show including features on Skateboarding, NFL, Cricket etc. Rachel is the official race reporter for the Bennetts British Superbike Championships, which airs live on Eurosport 2. She is also the face of Studs Up – a football podcast for Goal.com, which reaches over 60 million football fans around the world every month.

Over the summer of 2017, Rachel fronted a series of marathons and triathlons for Channel 4 including the Tobago International Sea To Sea Marathon, which saw competitors run 26.2 miles from the Caribbean Sea to the Atlantic Ocean. Since 2015 she has hosted Live@Wimbledon, the official online channel of the Wimbledon tennis championships.

More recently, in spring 2018, Rachel embarked on the FIFA World Cup Trophy Tour, sponsored by Coca Cola for Goal.com. Rachel toured some of the most fabulous locations around the world (including Tokyo, Shanghai, Panama, Bogota and Cologne), showcasing the famous trophy to fans as it made its way to Russia for the World Cup Finals this summer. Watch Rachel’s Tokyo video for Goal.com on Facebook.

Rachel is the host of ITV’s brand new show World of Sport: Wrestling, which initially aired over the Christmas 2016 period with a 2-hour special. She also fronted the 2016/17 Emirates FA Cup campaign for FA TV, the Football Association’s in-house TV channel. Rachel regularly contributes to ESPN and Aston Villa FC TV as well as Strongman Champions League, which airs on 5Spike and is distributed internationally.

One of Rachel’s proudest moments was being asked to co-host the 2017 PFA Awards from the Grosvenor House Hotel, Park Lane – the most prestigious awards ceremony in the footballing calendar.

Rachel was the main anchor at the 2017 Women’s Hockey World League Semi-Finals for BT Sport. She was previously part of the team on Matchday Live with Fletch and Sav, interviewing Premier League footballers and managers with her fun and engaging personality, live from grounds around the UK. Rachel helped launch BT Sport back in the summer of 2013 as a researcher but was soon fast-tracked to the on-air talent team where she was a regular on BTSP – BT Sport’s digital platform aimed at a younger audience and also featured across SportsHub, WSL (Women’s Super League football), Conference Football, NBA and Transfer Deadline Day. She also co-hosted the World Freestyle Football Championships live from the O2 Arena and was the host of BT Sport’s Action Woman show.

She hasn’t totally turned her back on running though; she has completed several half-marathons and ran the London Marathon in 2015 & 2016 clocking an impressive time of 3:00:15! Rachel is an ASICS FrontRunner Ambassador and also a contributor to Women’s Running magazine; she was featured on the cover of the December 2016 issue.