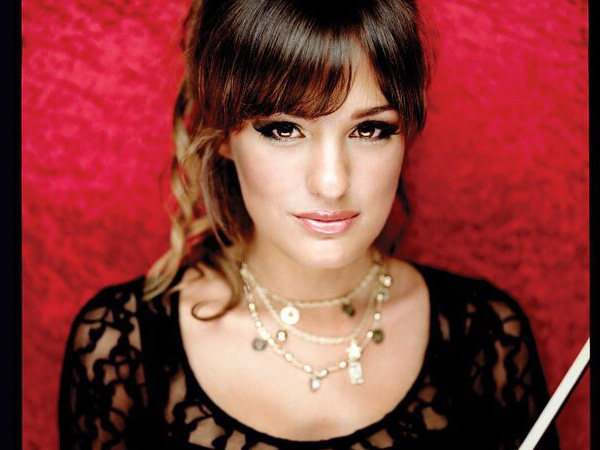 Nicola is one of the most sought after classical violinists. Providing inspiring and captivating performances she has wide appeal to all generations.

She was the Winner of Best Female Artist at both 2012 and 2013 Classical BRIT Awards and her recording, Homecoming; A Scottish Fantasy, made Nicola the first solo British violinist since the 1990s to enter the Top 20 of the Official U.K. Albums Chart. Nicola also performed at the opening ceremony of the 2014 Commonwealth Games to a live audience of approximately 40,000 and TV viewing audience of 9.4 million people.

Nicola is always in great demand with continued collaborations with the top orchestras in the world and a constantly busy tour schedule throughout the UK, USA Canada and more. For events Nicola can provide a beautiful intimate performance with her pianist, or perform with a larger ensemble or orchestra.

With concerto performances at the heart of her career, Nicola is in much demand with major orchestras and conductors across the globe. Highlights of the 2016/17 season include performances with the London Philharmonic, Israel Philharmonic, Frankfurt Radio Symphony, Gothenburg Symphony, City of Birmingham Symphony, Royal Scottish National Orchestra, Scottish Chamber Orchestra, San Francisco Symphony and Toronto Symphony amongst many others.  This season will see the continuation of the premiere performance circuit of the Wynton Marsalis Violin Concerto written for Nicola with the Leipzig Gewandhausorchester, Netherlands Radio Philharmonic and National Symphony Orchestra of Washington, D.C.  The season additionally features two extensive tours of North America with the Venice Baroque Orchestra and Royal Scottish National Orchestra that take her from Baltimore’s Shriver Hall to Los Angeles’s Disney Concert Hall.

Fiercely committed to music education and to developing young talent, Nicola has formed associations with schools, music colleges and local authorities. In 2010, she became Sistema Scotland’s official musical ‘Big Sister’ for the Big Noise project; a music initiative partnered with Venezuela’s El Sistema (Fundación Musical Simón Bolívar). As a board member and teacher, Nicola embraces her position of role model to encourage young people to take up music and work hard at it, and she continues to spread this message in school visits and master classes, not only in Scotland, but all around the world.

In addition, Nicola developed her own education and outreach initiative entitled The Benedetti Sessions that give hundreds of aspiring young string players the opportunity to rehearse, undertake and observe master classes culminating in a performance alongside Nicola. She has presented The Benedetti Sessions at the Royal Albert Hall, Cheltenham Festival and Royal Concert Hall Glasgow, and has plans to develop this on an international scale.

Winner of Best Female Artist at both 2012 and 2013 Classical BRIT Awards, Nicola records exclusively for Decca (Universal Music). Her most recent recording of Shostakovich & Glazunov Violin Concertos has been met with critical acclaim. Richard Morrison of The Times maintains that “This riveting performance of Shostakovich’s First Violin Concerto is Nicola Benedetti’s best recording to date.”  Her past seven recordings on Universal/Deutsche Grammophon include a varied catalogue of works from Szymanowski Concerto (London Symphony Orchestra/Daniel Harding) to Homecoming; A Scottish Fantasy, which made Nicola the first solo British violinist since the 1990s to enter the Top 20 of the Official U.K. Albums Chart.

Nicola attracts an enormous amount of worldwide media attention following the various facets of her extraordinary career and her international television appearances have been wide and varied including performing at the Opening Ceremony of the 2014 Commonwealth Games to a live audience of approximately 40,000 and TV viewing audience of 9.4 million people.

Nicola was appointed as a Member of the Most Excellent Order of the British Empire (MBE) in the 2013 New Year Honours, in recognition of her international music career and work with musical charities throughout the United Kingdom. In addition, Nicola has received eight honorary degrees to date.

Born in Scotland of Italian heritage, Nicola began violin lessons at the age of five with Brenda Smith. In 1997, she entered the Yehudi Menuhin School, where she studied with Natasha Boyarskaya. Upon leaving, she continued her studies with Maciej Rakowski and then Pavel Vernikov, and continues to work with multiple acclaimed teachers and performers.