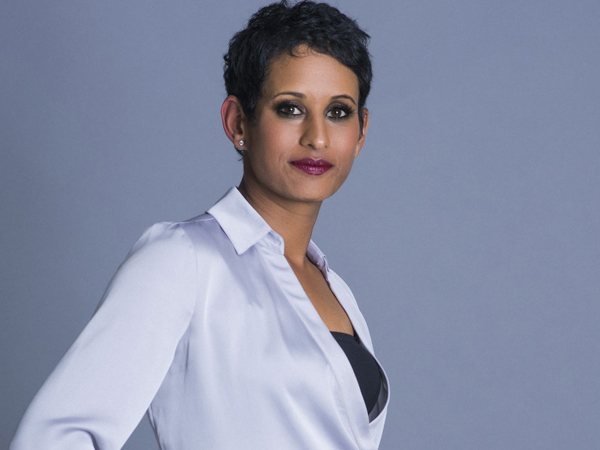 Naga Munchetty is known nationwide as a high-profile journalist and broadcaster.

She is currently one of the main presenters for BBC Breakfast and can be seen on the famous red sofa every week. Naga is also recognised by viewers of BBC Newsnight, having presented the show on numerous occasions

In addition to her television work, Naga is a familiar voice on BBC Radio 4’s PM, Moneybox and Pick of the Week.

Her career as a journalist began at the Evening Standard and The Observer newspapers, and soon moved into reporting for Reuters Financial Television. Her love of financial matters, news and television led her to CNBC Europe where she became an Executive Producer. She has also worked as a Producer and Reporter for Channel 4 News, before becoming an anchor for Bloomberg Television. There she fronted a daily show and regularly grilled major CEOs and Central Bankers. In 2008 Naga moved to the BBC to front BBC2’s Working Lunch and subsequently the European Breakfast programme for BBC World News.

Golf is one of Naga’s passions and she plays as much as she can – She plays off a handicap of 8.
In 2013, Naga was crowned the winner of Celebrity Mastermind on the subject of The Ryder Cup – she answered every question correctly on her pet subject.

In 2014, she was named by the Asian Power List as one of the UK’s most powerful Asian females. In 2018, she collected ‘the ‘Media Personality of the Year’ award at the Asian Media Awards.

Naga is a supporter of many charities and causes close to her heart, including mental health, education, women’s rights and animal welfare.

She is always keen to combine a love of sport with taking on fresh challenges – she ran the 2013 London Marathon and in 2015 took to two wheels completing the Women V Cancer Ride The Night 100km cycling ride. Naga recently returned to the saddle completing a gruelling London to Paris bike ride and the 100 mile Prudential Ride London event.

Naga was one of the judges for The Baileys Women’s Prize for Fiction, 2016, and in the same year she was a celebrity contestant on BBC’s Strictly Come Dancing.

She is an excellent moderator, host and presenter.
As a seasoned and tenacious journalist and broadcaster, she is comfortable in all circumstances. One of her key skills is the ability to put audiences and interviewees at ease with her level-headed, considered, meticulous and thoughtful manner.