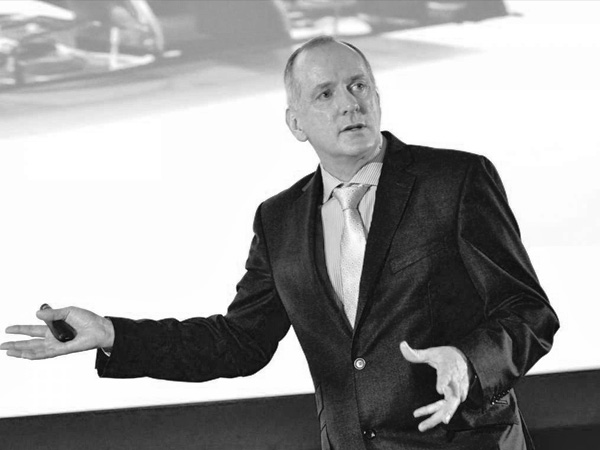 Inspirational Business Lessons with tales from Formula One

Mark delivers inspirational business lessons learned from a diverse career spanning almost 30 years at the forefront of Formula One. Developing personnel, understanding their inner motivations, cultivating teamwork and creating an atmosphere within which the job always gets done, the deadlines always met, and goals constantly pursued; this is the requirement, whether in Formula One or any other business.

From Head of Cosworth’s F1™ Business Unit and Head of Commercial Affairs at Jaguar / Red Bull Racing, to Marketing Director at Jordan Grand Prix, Mark Gallagher has been immersed in the motorsport industry his whole working life. Starting out as an F1 journalist and broadcaster he went on to become a media consultant for major sponsors including Marlboro and Canon. He joined Eddie Jordan’s fledgling F1 team for its debut season in 1991, returning to the team in 1995 where he became head of marketing and was on the team’s management board during its most successful years.

Joining Jaguar Racing in 2004 Mark remained with the team during its transition into Red Bull Racing before leaving to establish his own racing team, Status Grand Prix with won the A1GP World Cup of Motorsport, and later became a winning team in both GP2 and GP3 – the feeder categories to Formula One.  In 2009 he took over the running of the world famous Cosworth F1 engine business, re-establishing the British company as a leading supplier to one third of the F1 teams.

Formula One is a unique mix of business and sport, where strong leadership, efficient team work, split second decision making and a clear focus on delivery are required to compete at the highest levels in the Grands Prix which comprise the FIA Formula One World Championship.

“Everyone thought your presentation was fantastic and personally I thought you were the best storyteller I have ever heard!”

“Your ability to convey the excitement of F1 combined with all the difficulties and frustrations we all face, was masterful.”