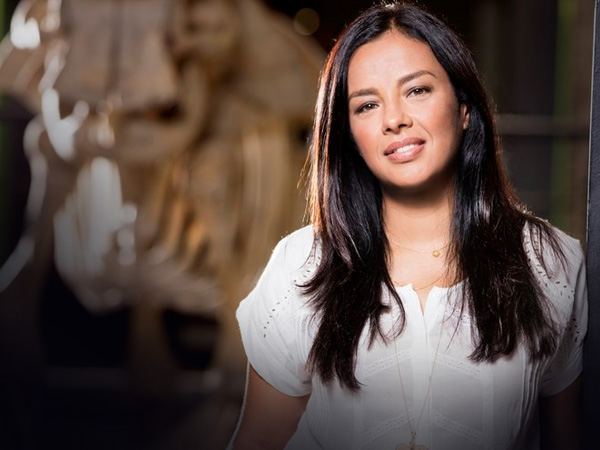 Liz is an experienced conference facilitator and awards host, and has MC’d events for a variety of clients, including the UK’s National Science + Engineering Competition Awards and the Natural History Museum’s prestigious Wildlife Photographer of the Year Awards.

Liz’s TV career has always drawn on her academic expertise and in 2008 she completed a Masters in Wild Animal Biology with the Royal Veterinary College and Zoological Society of London, and set up a research project in Nepal to study tigers, coming first in her class. Following her Masters, Liz decided to try her hand at presenting her passion: science.

Recently returned from filming the hugely successful Big Blue Live series in Monterey, California, for the BBC, and for PBS in the USA, she has also been busy filming a brand-new wildlife series for BBC1 about animal migrations called Earth’s Greatest Migrations. Liz is also a co-presenter of BBC’s Stargazing Live.

They say timing is everything and as she completed her final Masters exam she was hired by the BBC to present Bang Goes The Theory, BBC1’s popular science magazine show, which aired for eight series. Since then, Liz has worked on various science and natural history programmes, including BBC2’s Museum Of Life, a series about the Natural History Museum in London;  BBC2’s Horizon, presenting specials on The Transit Of Venus and Tomorrow’s World, where she delved into the latest science and technology set to transform the planet, as well as Super Smart Animals and Animals In Love for BBC1, which saw her travel the length and breadth of the globe to investigate the science of animal behaviour, cognition and emotional intelligence.

Liz was born in France to a French father and Trinidadian mother of Indian Portuguese descent, and moved to Ireland when she was nine years old. She was especially interested in biology and chemistry at school, which led her to study biochemistry at university. She then took a year out to travel and sing in a band, amongst other things, and ended up presenting the IRMA Music Awards for RTÉ in Ireland. One thing led to another and Liz continued her stint as a presenter, which involved filming a documentary about tigers in Pench National Park in India and moving to London to present Channel 4’s breakfast show RI:SE and BBC1’s cult music show Top Of The Pops.

Her latest projects include Operation Snow Tiger, a series on Amur tigers for BBC2, tracking the world’s largest big cat during the harsh winter of the Russian far east, Big Blue Live for BBC1 and PBS in the USA, a marine wildlife extravaganza in which humpbacks, great white sharks and blue whales, amongst other animals, were filmed live, and she continues to present for Stargazing Live, BBC2’s hugely successful astronomy series.

Liz has always been passionate about big cats but her love of tigers is now deeply rooted as a result of her studies and she supports several organisations that work towards the conservation of wild tigers. Liz pesters anyone who will listen about the wonders of the natural world. Part of the reason she continues to communicate science on television is due to her passion for reawakening the public’s curiosity about the world around them.