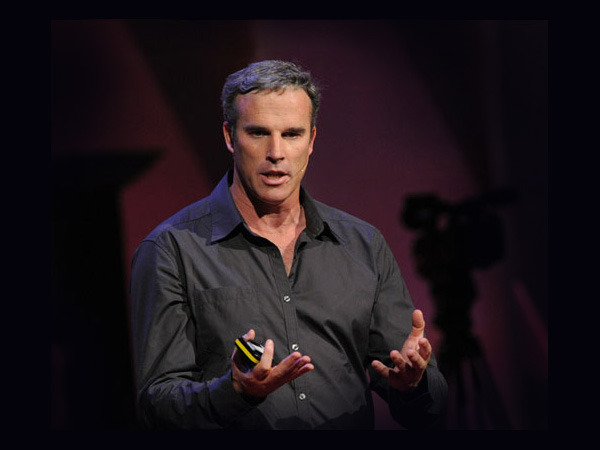 What makes Lewis Pugh one of the world’s leading inspirational speakers? What is it about his talks that bring audiences to their feet, capturing the imaginations of world leaders like Bill Clinton, Ted Turner and Desmond Tutu?

Lewis puts his hard learned lessons into the context of a corporate environment, with highly relevant messaging which is, inspirational, motivational and, most importantly actionable. The only person to have completed a long distance swim in every ocean of the world, each of these seemingly impossible feats was done to raise awareness about the vulnerability of our oceans and their importance to humanity.

Lewis goes to extremes. He’s been to the world’s most inaccessible places. He’s put his body through unimaginably difficult conditions. He’s learned how to harness the energy that comes from overcoming extraordinary odds, and he knows how to inspire audiences to rise to their own internal challenges. His talks make a difference, to individuals, and to organizations. He shares the visualization that enabled him to undertake the first swim across the sub-zero waters of the North Pole. And he shares the “radical tactical shift” that he used to complete the first swim across a glacial lake on Mt Everest. Most importantly, he inspires people to reach for the dream of achieving their own impossible.

Lewis is a vivid storyteller. His address on leadership at the Business Innovation Forum in Rhode Island was voted as one of the “7 Most Inspiring Videos on the Web”.

Over 2.5 million people have viewed his TED talks, and countless others have followed him on BBC, Good Morning America, CNN, Jon Stewart, National Geographic, Sky News, Al Jazeera, Jay Leno and more. His autobiography “Achieving the Impossible” is a Bestseller and was chosen for Oprah’s Exclusive Book List.

Lewis has received a number of awards including France and South Africa’s highest honours, as well as the Freedom of the City of London. In 2010, the World Economic Forum named him a Young Global Leader for his “potential to contribute to shaping the future of the world through inspiring leadership” and in 2013 the United Nations Environment Programme appointed him “Patron of the Oceans.”

He can speak on topics such as:

Lewis is a totally enchanting speaker and provides valuable lessons to apply to business and to life.

You won’t find a more captivating story teller… Lewis stole the show at the World Economic Forum in Davos.

Thank you for coming to speak to us. You have a very special gift. Not many people can speak to a group of world leaders like you did – with so much authority and passion. I could have heard a pin drop.

Your address was the perfect close to a conference centered around achievement and moving to the next level. The story you have to tell is incredibly unique and was delivered in such a professional and entertaining manner. Everyone was inspired by your extraordinary journey.

Lewis Pugh doesn’t tell us what to do, he shows us what can be done.

Bill Clinton  42nd President of the United States of America

Lewis Pugh gave the perfect TED talk: a little bit of action, some thinking outside the box, humbling words on the need to respect nature, a happy ending. A Hollywood scriptwriter could not have structured it better.

Thank you for such an inspirational and awe-inspiring speech at our 200th Anniversary celebration.

Lewis tells a very inspiring and motivating story of achieving sporting excellence at it’s most extreme. I was blown away by it and at the same time saw real value in how we can all approach our challenges and reach our goals.