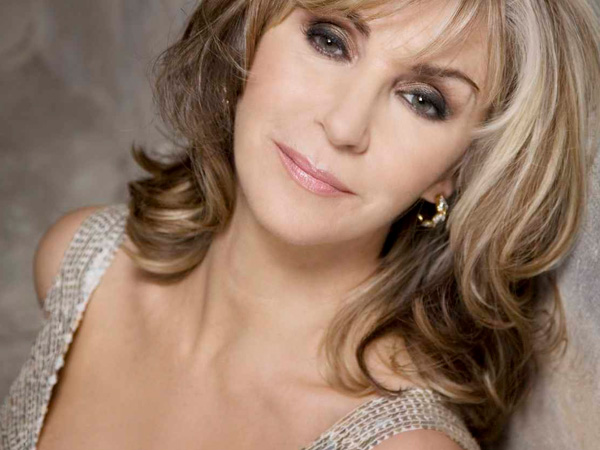 Operatic and musical theatre star, Lesley is one of Britain’s best known sopranos with a glittering career that has spanned over 30 years.

A charismatic performer, vocal showstopper and consummate professional Lesley entertains and enthrals her audiences with her concert and private performances. With 14 albums to date Lesley’s popularity is undiminished and she has recently recorded two songs for G4’s new album ‘Love Songs’ for release in 2017. Lesley also continues with her UK tour of her ‘An Evening With’, in which she is interviewed about her career, illustrating it with favourite arias and songs, with which she’s become known.

Lesley is Britain’s best known soprano, regularly appearing in opera, music theatre, concert, on television and CD. For more than 30 years she has enjoyed one of the most successful and idiosyncratic careers of any modern-day, classically trained soprano, winning both critical acclaim and the affection of many fans and music lovers through the breadth and diversity of her work. Internationally Lesley has performed throughout Europe, the USA, Australia, Russia, Brazil, Japan, Malaysia, Taiwan and South Korea.

As a recording artist, she has fourteen solo CDs to her credit; Soprano in Red received the Gramophone Award for ‘Best-selling Classical Artist of the Year’, Diva! A Soprano At The Movies, Prima Donna, Simple Gifts, Soprano in Red, Soprano in Hollywood, and I Will Wait for You all received silver discs and A Soprano Inspired, Lesley Garrett and When I fall In Love all achieved gold discs. Recent albums are Travelling Light, The Singer, So Deep is the Night and Amazing Grace. She was also a featured artist on the platinum selling Perfect Day single released by the BBC in aid of Children in Need.

As well as recordings of Handel and Gilbert and Sullivan operas, Lesley’s most recent classical recordings were for Sir Charles Mackerras’s Magic Flute and Cosi Fan Tutte and her most recent solo album A North Country Lass was released in April 2012.

Lesley’s major television appearances include Lesley Garrett…Tonight, The Lesley Garrett Show, The Singer, Sacred Songs and Lesley Garrett – Desert Dreams, Christmas Voices, Who Do You Think You Are, Strictly Come Dancing, Loose Women and most recently a Songs of Praise Special – My Story, My Music with Aled Jones for the BBC. Lesley was also the subject of a South Bank Show on LWT.

Lesley made her Royal Opera debut in their production of The Merry Widow in 1997.  She returned to the Coliseum in a revival of her acclaimed Rosina in Rossini’s Barber of Seville, having first performed the role there in 1998 and sang Hannah Glawari in a new production of The Merry Widow with Welsh National Opera.  Keen to explore the challenging and different vocal discipline of the West End musical, Lesley has made more recent acclaimed appearances in The Sound of Music and Carousel.

In 2013 Lesley returned to the opera stage with a new production at Opera North in which she enjoyed a great success singing the role of Elle in Poulenc’s La Voix Humaine.  In 2015 she sang in a specially devised production of Chorus for Welsh National Opera and Despina in a new production of Cosi Fan Tutte for Garsington Opera. She also gave a UK tour of her ‘An Evening With’, in which she was interviewed about her career, illustrating it with favourite arias and songs, with which she’s become known. In 2016 she received rave reviews for her performance as Val in Opera North’s world premiere production of Mark Simpson’s opera, Pleasure. And in autumn 2016 Lesley toured again with ‘An Evening With’ and appeared a number of times on BBC and ITV. She will continue to tour with ‘An Evening With’ in 2017 as well as appearing with G4 as a special guest at one of their London concerts in their spring tour.

In 2000 Lesley published her autobiography “Notes from a small soprano.” She was awarded a CBE in the 2002 New Year’s Honours List for Services to Music and is a Fellow of the Royal Academy of Music and an RAM Board Member. She holds Honorary Doctorates from the Universities of Sheffield and the Open University. She continues to study regularly with Australian born Joy Mammen, her singing teacher for more than 35 years.