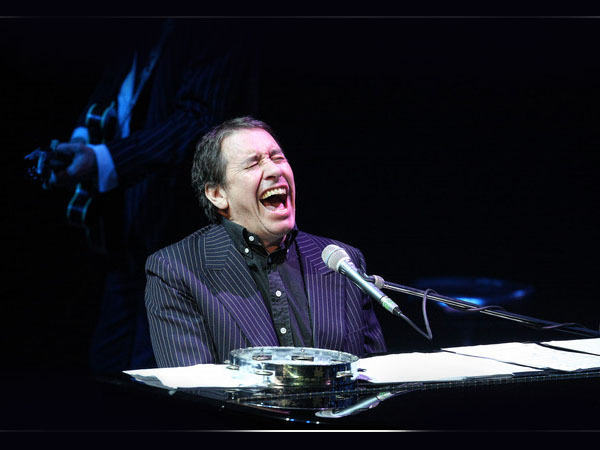 Jools Holland is a musical master of many trades. He can be recognised as a blisteringly energetic, piano-pounding performer of boogie-woogie, jazz, and R&B the keyboard-wizard sideman to one of the great new wave pop bands of the ’70s and ’80s; or as one of the U.K.’s most popular television presenters. His extensive work has seen him collaborate with legendary artists including Eric Clapton, Sting & Smokey Robinson from the late ’70s onward.

Jools and his Rhythm & Blues Orchestra continue to dazzle audiences with their exuberant live performances. Having completed several tours around the Europe and the world, they continue to play to audiences in excess of 300,000 each year.

At the age of eight, Jools could play the piano fluently by ear, and by the time he reached his early teens he was proficient and confident enough to be appearing regularly in many of the pubs in South East London and the East End Docks.

At the age of 15, Jools was introduced to Glenn Tilbrook and Chris Difford; together they formed Squeeze, and shortly afterwards they were joined by Gilson Lavis (who had already played with, among others, BB King, Chuck Berry, and Max Wall) – who still drums with Jools.

Up The Junction and Cool For Cats made Squeeze’s success meteoric and their popularity rapidly extended to America, where their tour included performances at Madison Square Garden.

Jools and the Rhythm & Blues Orchestra play to audiences in excess of 300,000 each year.

Recently, following the hugely successful release of The Golden Age of Song, Jools Holland and his Rhythm & Blues Orchestra returned on 24th November 2014 with a brand new album, Sirens of Song, and an elite gathering of world-class female artists. The album showcases Jools’ talent for amazing collaborations as well as superb musicianship and features duets between the music maestro himself and some of the most iconic female voices in contemporary and classic music: Kylie, Emeli Sandé, Joss Stone, Laura Mvula, Imelda May, Melanie C, Eartha Kitt, and Rumer to name just a fe