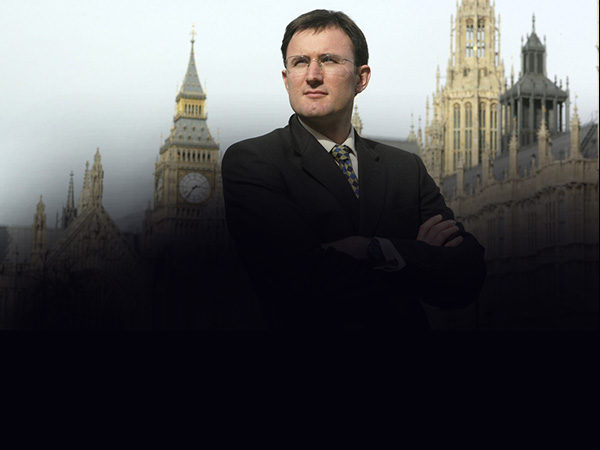 James was the BBC’s Deputy Political Editor at the forefront of the corporation’s political news coverage. He has reported on British politics for more than two decades – in print and on the airwaves – covering five general elections and interviewing every prime minister since John Major. James is currently the BBC’s Diplomatic Correspondent.

James has chaired conferences for organisations such as the British Chambers of Commerce. He also does a variety of public speaking engagements, ranging from breakfast briefings to after-dinner speeches.

He has also presented a variety of programmes on television and radio including the Andrew Marr Show on BBC1, The Daily Politics on BBC 2 and The World at One and Westminster Hour on BBC Radio 4.

James spent ten years at The Times, mostly as a Political Correspondent at Westminster. But he also worked as the Brussels Correspondent and assistant foreign news editor, helping to run the paper’s foreign desk in the wake of the 9/11 attacks.

In 2003 he was headhunted by the BBC where he was appointed a Political Correspondent. He was swiftly promoted to Chief Political Correspondent, leading the BBC’s 24 hour political news coverage from Westminster for five years. At the same time, he presented Straight Talk, a weekly political discussion show. In 2009, he was promoted to Deputy Political Editor, covering politics primarily for the BBC’s flagship Six and Ten o’clock news and Radio 4 news programmes.

James has written two books. Duel – a true story of death and honour (Canongate) recounts not just the extraordinary history of pistol duelling but also the story of James’ ancestor who took part in the last fatal pistol in Scotland. Andrew Marr described the book as “gripping, unusual and splendidly-written”. Gordon Brown said it was a “riveting account”. James turned the book into Timewatch documentary for BBC2 in 2007.

He has also published a volume of poetry – Landale’s Cautionary Tales: Comic Verse for the 21st Century (Canongate).