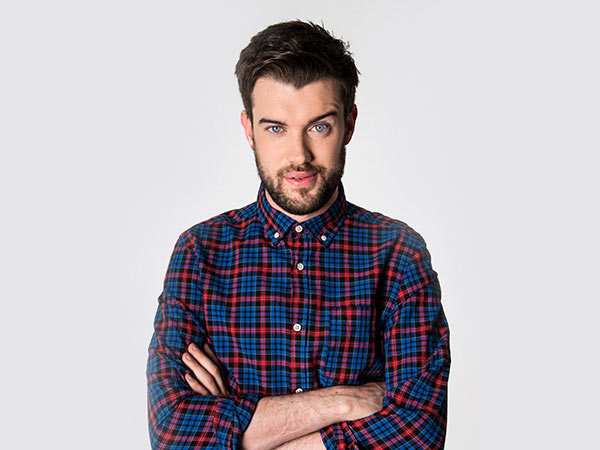 Whether facilitating the entire day of performing a high energy stand-up routine he always brings his uniquely sharp wit and irreverent flair that keeps audiences hooked.

Jack hosts his own BBC chat show ‘Backchat’ with his father Michael Whitehall, he’s a regular panelist for Sky 1’s ‘A League of Their Own’ and is the youngest performer in history to host the Royal Variety Performance.

Jack has firmly established himself as one of the UK’s most exciting and successful comedy talents, a status cemented by his People’s Choice Award for the King of Comedy at the 2012, 2013 & 2014 British Comedy Awards.

As a successful and much sought-after stand up, actor, writer and presenter, Jack has firmly established himself as one of the UK’s most exciting and successful comedy talents, a status cemented by his People’s Choice Award for the King of Comedy at the 2012, 2013 & 2014 British Comedy Awards.

A talented actor, Jack received critical acclaim and another British Comedy Award nomination for his portrayal of former public schoolboy JP in the hit C4 comedy drama Fresh Meat. Jack received similar praise for his revival of JP in the second series of the show, as well as being nominated for Best Comedy Performance at the Royal Television Society Awards. Series 3 was also brilliantly received, with the equally critically-acclaimed 4th series airing in early 2016.

In 2012 Jack created hit school-based sitcom Bad Education, which concluded in 2014 after three critically-acclaimed series. Jack starred in the show as hapless history teacher Alfie Wickers alongside a stellar cast including Matthew Horne and Harry Enfield. It was nominated in 2013 for Best Sitcom at the British Comedy Awards. A film adaptation, The Bad Education Movie, was released in summer 2015. He also appears alongside Jennifer Aniston and Julia Roberts in the film Mother’s Day, released in the summer of 2016.

Jack hosts his own chat show with his father Michael Whitehall on BBC 3 entitled Backchat and is a regular panelist for Sky 1’s A League of Their Own. He also hosted 2015’s  Royal Variety Performance, the youngest performer in the history of the show to do so. Other recent television appearances include QI, Big Fat Quiz of the Year, The Graham Norton Show, Sunday Night at the Palladium and Have I Got News For You.

In 2014 he completed his first arena tour, performing Jack Whitehall Gets Around to packed houses across the UK. The show saw Jack performing in a unique ‘in the round’ setting on a circular stage at the centre of the arena, a UK first for a solo stand-up tour. The DVD of the tour show, Jack Whitehall Gets Around: Live From Wembley Arena, was released on 24th November 2014.

Jack has performed several sell-out solo stand-up shows at the Edinburgh Fringe Festival garnering rave reviews from audiences and critics alike. In August 2009, Jack was nominated for the Best Newcomer Award at the Edinburgh Comedy Awards for his debut solo Fringe show, Nearly Rebellious. In 2010 he returned to Edinburgh with a brand new stand up show entitled Learning Difficulties. In 2011, Jack brought two shows to the Fringe, performing his solo stand up show Let’s Not Speak Of This Again at the EICC and the chat show Back Chat with his father Michael. Jack completed the tour of Let’s Not Speak Of This Again in the winter of 2011, during which he filmed his first stand-up DVD, Jack Whitehall Live, at the Hammersmith Apollo. The DVD was released in November 2012 and entered into the Top Ten Comedy DVD Charts for Christmas 2012.

In July 2010 Jack performed at the Montreal Just For Laughs Festival as part of the prestigious New Faces line-up and was picked out by Hollywood industry bible Variety as one of their “10 Comics to Watch”. A nomination for the 2010 British Comedy Awards in the Best Male Comedy Breakthrough Artist category capped a truly incredible year for Jack which also saw him have the honour of performing for the Prince of Wales at the Royal Variety Performance  for the first time and jetting off to New York to record a special for Comedy Central Presents. Jack returned to the U.S. in May 2011 to feature as a guest on The Ellen DeGeneres Show and in March 2012 to perform at the first ever Secret Policeman’s Ball to be presented at the Radio City Hall in New York. In 2015, he appeared on The Late Late Show with James Corden.

In October 2013 Jack released his first book, Him & Me. Written with his father Michael Whitehall, Him & Me is a hugely entertaining and irreverent account of a unique relationship between a father and son. Written in two distinctive styles, it reflects the larger-than-life personalities of its authors, Jack and Michael Whitehall.

Edinburgh and Beyond (guest stand up) (Paramount Comedy, 2008)

The World Stands Up (guest stand up) (Paramount Comedy, 2008)

Support for Mat Horne and James Corden mini UK tour: Is This Funny? (2008)

Inventive, well-written routines…A brilliant command of the language, able to conjure up just the right image at the right time
Chortle

Slick, almost clinically professional and so zeitgeisty it hurts…groomed for inevitable stardom
Scotland on Sunday

Almost too young and talented
Telegraph

A new comer with the poise of an old timer
Herald

A stand up machine
Guardian