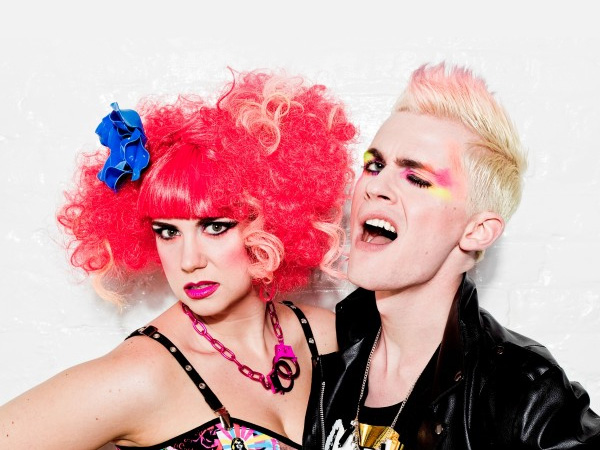 The Mad Scientists of Pop

Musical comedy act Frisky & Mannish have been called the “mad scientists of pop, mixing up seemingly incompatible artists and genres to huge comic effect in a type of twisted pop cabaret. They’ve been described as distilling entire genres into their separate elements with “the tenacity of a Rottweiler and the charm of a Disney prince.”

The act has also been identified in The Guardian as a rare example of a successful mixed-gender comedy duo: “From Flight of the Conchords to French and Saunders, single-sex double acts are everywhere – but Frisky & Mannish show that more should cross the gender divide.”

In 2008, Frisky & Mannish went to a friend’s fundraising event with four musical pastiches they’d thrown together one lazy afternoon, and walked out with a firm booking for an hour-long show. This eventually became School of Pop (2009), a massive sell-out success which received thirteen five-star reviews and was hailed as the “undisputed hit of the Edinburgh Fringe” (Herald). After transferring to Soho Theatre in London for a sell-out limited run, the pair embarked upon an international tour that included Melbourne Comedy Festival, Adelaide Cabaret Festival, New Zealand International Arts Festival, and the Sydney Opera House. They subsequently won the Editor’s Choice Award at Brighton Fringe, received a nomination for the Chortle Award for Best Music and Variety Act, and were named “talents to watch” in both The Independent and The Sun. They were also finalists in both the Musical Comedy Awards and Hackney Empire New Act of the Year.

They returned to Edinburgh with a critically-acclaimed sequel, The College Years (2010), which achieved second place out of over 2500 productions in Edinburgh Festival Guide’s ‘Top-Rated Shows’. Their third show, Pop Centre Plus (2011), was a sell-out smash, culminating in the duo’s biggest solo gig to date at Shepherd’s Bush Empire. Extra-Curricular Activities (2012) won the pair an award for Best Comedy at Adelaide Fringe Festival, and after a year’s hiatus, they returned to form with Just Too Much (2014), touring the UK and Australia. They have also headlined three West End variety nights – two at the Lyric Theatre on Shaftesbury Avenue and one at Koko in Camden – and played all of the major UK festivals including Glastonbury, Bestival, Latitude, and T in the Park.

Their profile was significantly raised after a well-received live performance on BBC Radio 1’s The Scott Mills Show in 2011, and the following year they were invited to write an original Christmas song for the programme, which became the popular ‘Perfect Christmas Single’. They have been featured on BBC Radio 2’s The Arts Show, BBC Radio 3’s The Verb, BBC Radio 4’s Sketchorama, BBC2’s The Culture Show and Dick and Dom’s Funny Business, and BBC3’s Three at the Fringe.

“A gold-star masterclass” Mail on Sunday

“A force of nature” West Australian