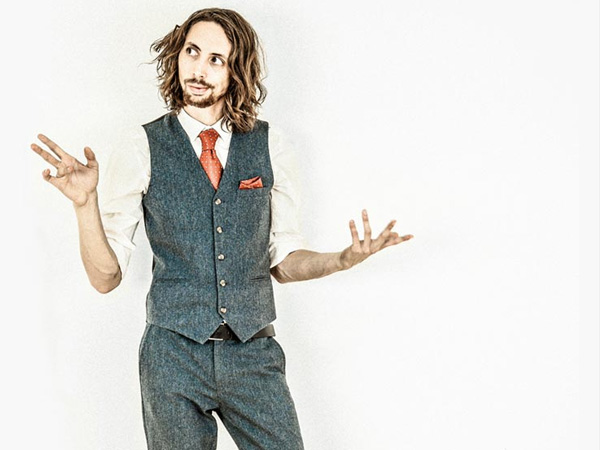 Eric makes for a great host and compere. His onstage energy, enthusiasm and off the wall comedy brightens up any corporate event. His ability to improvise and perform will keep audiences enthused and engaged, making it a night that won’t be forgotten in a hurry.

“★★★★ LIKEABLE, SWEEPING THE AUDIENCE IN THE SHEER ENERGY OF HIS PERFORMANCE. THE STRENGTH OF HIS SCATTY CHARACTER RIPS THROUGH THE ROOM LIKE A MINI-HURRICANE. ” – CHORTLE

Eric has performed stand up around the world including, the Just for Laughs Comedy Festival in Montreal where his recorded set for TV went out on Comedy Central UK, several solo shows at The Edinburgh Fringe Festival. Eric has supported Eddie Izzard (in English and French), performed a theatre run of his solo show in Paris, and in June 2015 he won the ComediHa International Comedy Award in Quebec.

Eric is slowly but surely making a name for himself in TV in both the UK and France. His appearances include Life’s Too Short (HBO), The Midnight Beast (E4), Impractical Jokers (BBC3) host of How To Survive A Disaster Movie (Channel 5) and starred in a prime time show for TF1 France. He’s even starred alongside Bruce Willis in a TV commercial!

Co-starring in this year’s motion picture Moonwalkers, alongside Rupert Grint and Ron Perlman. A lead role in AmStarDam which has been nominated as Best UK feature film at Raindance Festival. And with a substantial role in Luc Besson’s film Valerian & The City of a Thousand Planets, Eric is fast on his way to becoming a silver-screen star.

“★★★★ LIKEABLE, SWEEPING THE AUDIENCE IN THE SHEER ENERGY OF HIS PERFORMANCE. THE STRENGTH OF HIS SCATTY CHARACTER RIPS THROUGH THE ROOM LIKE A MINI-HURRICANE. ” – CHORTLE

“★★★★ THE UNDENIABLE INTELLIGENCE OF ERIC LAMPAERT’S STAND-UP RARELY STOPS HIM FROM INDULGING IN SILLINESS OR, OCCASIONALLY, OUTRIGHT WEIRDNESS.” – TV BOMB

“★★★★ HE MAKES IT LOOK SO EASY BUT THIS IS A MAN WITH VERY FUNNY BONES. DEFINITELY ONE TO CATCH.” – DAILY EXPRESS

“★★★★ SUPERB BANTER THAT WAS CLEARLY IMPROVISED. THE SIGN OF A GOOD COMEDIAN.” – THREE WEEKS

“★★★★ LAMPAERT IS AT EASE WITH THE PERFORMER-PUNTER DYNAMIC, DISPLAYING A COOL COMIC EASE THAT GROUNDS THE SHOW. NATURAL COMIC FLAIR AND THE KNACK FOR A DECENT HOOK, ACTION-PACKED AND RAPID, EXPLORING THE LESS-TRADITIONAL DELIVERY STYLE REALLY WORKS FOR HIM, AND SHOULD PROVE ENOUGH COMIC BITE TO TAKE HIM TO THE NEXT LEVEL. ” – THE SKINNY