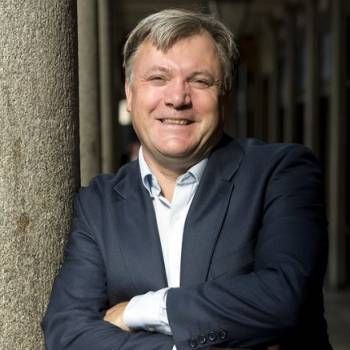 A big player in British politics, Ed Balls is best-known for his position as UK Shadow Chancellor from 2011 to 2015, amongst other political accolades, such as his role as education secretary and position as Chief Economic advisor to the treasury. As a leading global economist, Ed is well-placed to discuss monetary policy, Eurozone issues and the future of Britain.

Ed Balls is well-known for his various roles within UK government. With his vast political history and acute intelligence on issues such as financial markets, the global economy and the future of Britain, he is a current and insightful choice as a keynote speaker. Making his dancing debut in 2016 by appearing on BBC One’s Strictly Come Dancing, also won the nation’s praise as he demonstrated sheer determination and perseverance, he can share this experience on the speaking circuit.

Making his dancing debut in 2016 by appearing on BBC One’s Strictly Come Dancing, also won the nation’s praise as he demonstrated sheer determination and perseverance, he can share this experience on the speaking circuit.

Previously holding many high calibre cabinet positions, Ed was an influential force within British government for many years. Previously the UK Shadow Chancellor from 2011 to 2015, and the Secretary of State for Children, Schools and Families from 2007-2010, Ed served many successful years in Westminster.

Ed was formerly the UK Economic Secretary and Minister for Financial Services from 2006-2007, and the Chief Economic Adviser to the UK Treasury from 1997-2004, during which time he was the Chair of the International Monetary Fund Deputies and UK G20 Deputy.

Now out of Westminister, Ed is still an economist and British Labour Party politician. He is the Senior Fellow at Harvard University Kennedy School’s Mossavar-Rahmani Center for Business and Government and Visiting Professor to the Policy Institute at King’s College London. The politician actively blogs and writes speeches on the issues affecting the current economic climate.

Ed is married to Yvette Cooper MP, the Shadow Home Secretary, the couple have three children. Ed is also the club chairman of Norwich City. He is a member of the Privy Council and an Honorary Fellow of Keble College, Oxford.

Erudite and professionally experienced in the public sector, Ed Balls is an ideal choice for the corporate circuit. His economic expertise makes him well-placed deliver a keynote speech on the future of Britain after Brexit.