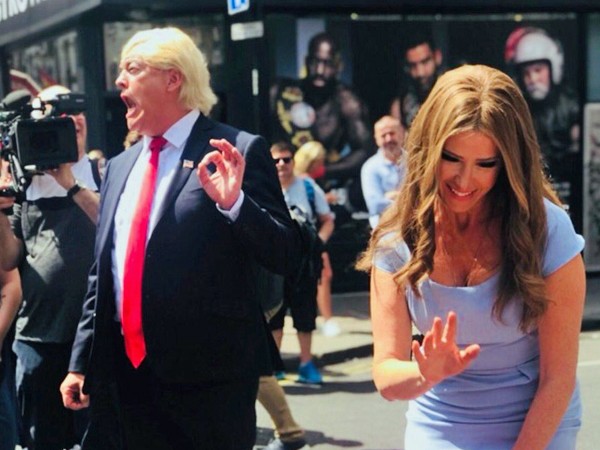 aka Lewis Macleod and Ronni Ancona

They offer a cabaret show and are also available to host your awards evening or event in character.

About Lewis and Ronni:

Lewis also recently finished shooting on THE CROWN for Netflix and will be seen playing Iain Tennent in the new series.

Ronni Ancona’s comedy career started on the comedy circuit and she won the Time Out Hackney Empire New Act of the Year in 1993. For many years she worked extensively in radio and on television shows, such as Fist of Fun. She also appeared in the first series of The Sketch Show before The Big Impression.

In 2005 she played Barbara, opposite Bill Nighy, Miranda Richardson and Emily Blunt in Stephen Poliakoff’s Gideon’s Daughter on BBC One.

She has appeared numerous times on the BBC celebrity panel show QI, presented Have I Got News For You and appeared on the Channel 4 comedy show TV Heaven, Telly Hell discussing her preferences in television shows.

Ronni has also started in the BBC commissioned a comedy sketch series titled Ronni Ancona & Co consisting of her own material and co-starring Phil Cornwell, Jan Ravens and John Sessions. The show initially aired on 25 May 2007 and had three episodes. In 2008 Ancona appeared in the film Penelope as Wanda.

Ronni’s first book A Matter of Life And Death: How To Wean A Man Off Football was published by Faber & Faber. As part of BBC’s Big Read she promoted The Lion, the Witch and the Wardrobe.

In 2012 she appeared in Last Tango in Halifax as Judith on BBC One. On 2 January 2015 she was a guest on Room 101. In 2016, Ancona played the role of Mrs Fletcher, the manager of a local care home in the seventh series of the Scottish comedy, Still Game.

On stage Ronni was Beline in Molière’s The Hypochondriac at the Almeida Theatre. In June 2015and began playing the role of Paula, in the new West End musical Bend It Like Beckham.

In April 2017 she appeared as a guest on ITV’s The Nightly Show presented by Jason Manford.