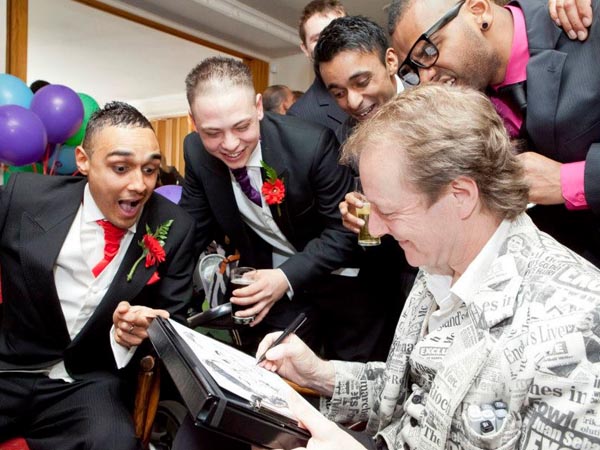 Having a digital caricaturist at your event can be instantly transformative. The Artist can provide on average 15 profiles an hour allowing guests to take home a unique and personalised memento at the end of the day.

Known for his funny and complimentary style, Rick likes to create a whole picture portraying a full body caricature usually involving a hobby or pastime or even themed to your event.

Digital caricaturing is much more suitable to corporate work than pen on paper because the picture is in digital format it’s instantly usable for all social and digital media.

Rick instantly prints a 6×4 inch colour print for guests to take away which fits neatly into a pocket. They’ll also get an emailed copy too.

Rick has been a full time caricaturist and cartoonist for the past 20 years both in the studio and in giving on-the-spot caricatures at corporate events. His studio work involves private and commercial commissions of caricatures from photos and commissions for magazines and newspapers.

A major client of his is the Armed Forces and he has established himself as one of the leading artists producing Officers’ Mess Caricature Paintings. There are now over 150 paintings of up to sixty people hanging in messes around the world.

Rick was the gag cartoonist for Sport First newspaper for two years with ‘Rick’s Sporting View’. He has also been the cartoonist for Quest magazine since 1999 and has had caricatures commissioned by ‘This Morning’ show for a series of ‘ I’m a Celebrity Get Me Out of Here’. Other commissions have included regularly producing comic strip art for a Talk Sport radio advertising campaign and his work regularly appears in ITN and Channel 4 News items.

When working on-the-spot, either traditionally or digitally, Rick’s style is funny and complimentary, making him a big favourite at weddings and other celebrations. He likes to create a whole picture portraying a full body caricature usually involving a hobby or pastime or even themed to your event. His live work takes him to all types of events across the country and abroad, including exhibitions, The Grand Prix, conferences, weddings, bar and bat mitzvahs, product launches and golf days.

When booking a caricaturist to work at your event please bear in mind that he can draw ten to fifteen people in an hour. If you have a specific number of people that must be drawn please consult us on the feasibility first.