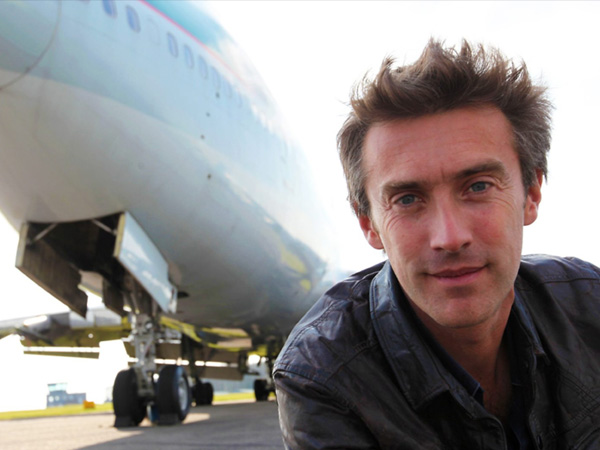 Dallas began his television career on The Gadget Show (Channel 5) followed by BBC1’s science magazine show, Bang Goes The Theory.  Likeable and enthusiastic, he is a lover of science, technology and engineering – and life!

He is one of the most versatile and well-travelled factual presenters in the industry and an accomplished host and facilitator. He has filmed in some of the most challenging locations all over the world: sewer diving in Mexico City, abseiling off the world’s tallest building in Dubai, exploring secret chambers in Egypt’s Great Pyramid, and rocket launches to the International Space Station in Kazakhstan.

Dallas presents some of the most ambitious landmark series across the BBC and beyond: City In The Sky (BBC2) with Dr. Hannah Fry – an in-depth look at the global aviation industry; Britain Beneath Your Feet (BBC1) – a series exploring secret subterranean Britain; Tutankhamun: The Truth Uncovered (BBC1) – revealing new scientific theories about the demise of the boy king; The Treasure Hunters (BBC1) – with Ellie Harrison which saw them travel the world on the trail of Earth’s most valuable treasures; Supersized Earth (BBC1) – the truly epic series which examined the extraordinary scale and pace with which humans have transformed the Earth; Stargazing Live (BBC2) – with Dara O’Briain & Brian Cox, including broadcasting Astronaut Tim Peake’s historic live launch to the International Space Station (BAFTA nomination); Airport Live (BBC2) – a week of unique airside access at Heathrow Airport with Kate Humble, Dan Snow & Anita Rani; Egypt’s Lost Cities (BBC1) with Liz Bonnin – A feature length documentary that used satellite technology to hunt for undiscovered historic Egyptian treasures.

On BBC4 he is a regular presenter of the Horizon Guide series, which covers a variety of big science subjects, from dinosaurs to quantum mechanics. He has presented several out of this world projects including Voyager: Beyond the Final Frontier – the story of NASA’s epic interplanetary missions to explore the outer solar system & beyond, and The Drake Equation: The Search for Life – about the history of our efforts to find life beyond the earth, as well as searching for UFOs on The Sky at Night and helping Brian Cox demonstrate The Science Of Dr Who in a special televised lecture at the Royal Institution. He appeared as a live hologram in the 2014 Royal Institution Christmas Lectures as well as understudying the heavily pregnant presenter, Professor Danielle George.

In January 2015 Dallas won Celebrity Mastermind, his specialist subject being the films of Werner Herzog.

He is a regular contributor to the BBC’s Science magazine Focus, The Times’ Eureka magazine and has written for The Observer. He has been a guest on BBC Radio 4’s comedy science show The Infinite Monkey Cage, Loose Ends with Clive Anderson and Shaun Keavney’s Breakfast Show (BBC6 Music), and regularly appears on The One Show, BBC Breakfast & The Wright Stuff.

In 2015 Dallas was made an Honorary Fellow of the British Science Association in recognition for his work in engaging more people with science & technology. He is a judge on their annual Young Scientist & Engineer of the Year awards.

When not risking life and limb investigating life, the universe and everything, Dallas enjoys cooking, is an accomplished amateur magician, and was a ski instructor in the Cairngorms.