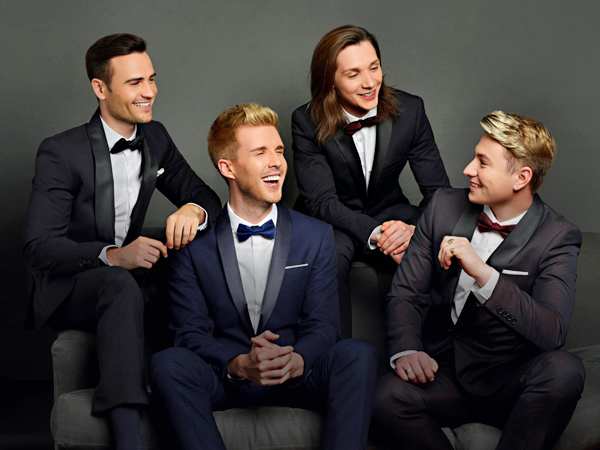 Collabro are the world’s most successful Musical Theatre group.

Having triumphed in their Britain’s Got Talent judges Semi-Final heat with over 63% of the votes, Collabro went onto win the overall competition with one of the biggest majorities ever.

Since the competition, Collabro have released a Number 1 debut album “Stars”, followed by “Act Two” which peaked at Number 2 in the charts in the summer of 2015. They have performed at the Royal Variety Performance; twice on Britain’s Got Talent (most recently the 10-year Grand Final compilation of past contestants – having been voted ‘The Nation’s Favourite BGT Winner’ in a national poll) and are now enormously successful internationally.

Notably, they have performed for over 30 million people in Japan on Music Station on two separate occasions – receiving a Gold Disc for Best International Artist alongside Sam Smith and Meghan Trainor. They have also completed two tours of America and signed a major US record deal.

Collabro – Matt, Tom, Jamie and Michael – were invited to perform to 7 million people at Soccer Aid 2016 to critical praise, and garnered excellent press reviews for their first performance as a four piece. Since then, the band have notably performed at the 2016 BBC Proms in the Park: Summer 2017 supporting the legendary Sir Cliff Richard and headlined 3 sell-out Concert Tours of the UK. A series of high profile concerts in Asia, Germany and Holland kick off Spring 2018 in fine style.

March 2017 saw the release of their highly anticipated third studio album -‘Home’- a collection of stage classics, fan favourites and also their first original song ‘Lighthouse’ reaching Number 7 in the UK Album Chart.In October and November 2017, Collabro toured 29 UK cities with the album, selling a record number of tickets. This record and tour received exceptional critical reviews and further affirmed Collabro’s position as the most successful Musical Theatre recording group in the world.