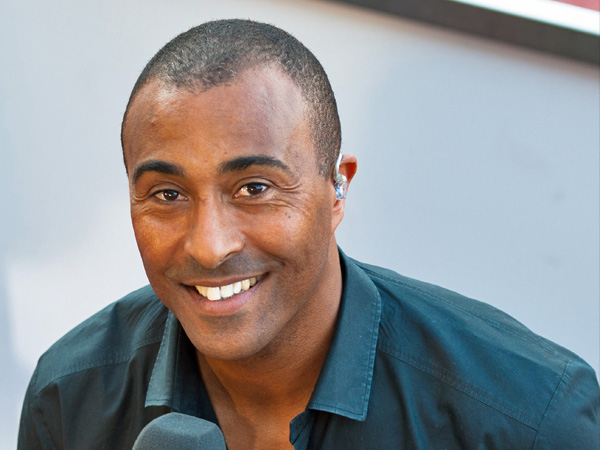 Conference, awards host and an excellent motivational speaker Colin Jackson is without a doubt one of the greatest athletes that Great Britain has ever produced.  110m hurdler Colin ranked in the world top 10 for 16 years, was World No.1 from 1992-1994 and for the last 7 years of his career, was never out of the world’s top 3. Setting a European junior record of 13.44 in 1986 he went on to set 7 European, 8 Commonwealth and 9 UK records at 110mh. Colin still holds the World Record over 60mh indoors (7.30, Sindelfingen 1994) and held the World Record over 110mh outdoors (12.91, World Title, Stuttgart 1993) for 13 years.

Colin Jackson (CBE) is a Welsh former sprint and hurdling athlete and on retirement, Colin was a natural choice to become one of the key members of the BBC’s sports production team and he continues to cover all of their Athletics output as a BBC pundit. Covering the Athens Olympics was obviously a highlight early in his broadcasting career and since then he has been an integral part of the BBC programming for all major athletic events since, including the London Olympic Games in 2012 and 2016 Olympics – Rio.

Colin co-hosted the BBC1 live morning show Sunday Life for its duration during 2008 and also filmed The Truth About You for BBC1, a documentary looking at the science behind his body, brain and success. Colin traced his roots in a moving episode of BBC1’s highly acclaimed, Who Do You Think You Are and dazzled us all with his dancing skills on Strictly Come Dancing and was thrilled to make it, by public vote, into the final and has honed is ice-skating skills for ITV1’s Dancing on Ice Goes Gold.

Colin worked with BBC Wales award nominated sport website Raise your Game from 2004 until early 2012, which, with the help of celebrity interviews and invaluable advice, encouraged children to be ambitious in sport and life in general. Colin used his travels around the world, working as both producer and presenter, to produce an interactive website which included video clips, interviews, and diaries the determination needed by sports men and women to achieve their goals and ambitions.

Colin gives much time to charity work. Amongst his commitments, Colin is the Patron of Fairbridge Cymru, a charity who work with young people that other organisations find difficult to engage – giving them the self-confidence and skills they need to change their lives. He works closely with Sport Relief, where he is a member of the steering panel and is also an International Inspiration Ambassador for UNICEF.  In 2012 Colin also launched the Red Shoes Academy, in partnership with the Welsh Government department of Education and Skills, leading a group of elite sport ambassadors in Wales to visit schools and colleges and inspire and motivate the next generation.

Colin’s personable, yet professional approach, combined with his high profile, mean that he is in demand from the commercial sector and like his on screen presentation and commentary Colin is a confident and charismatic conference/awards host and a high level motivational speaker. With an incredible competitive career behind him, he has been extremely well received by numerous audiences.