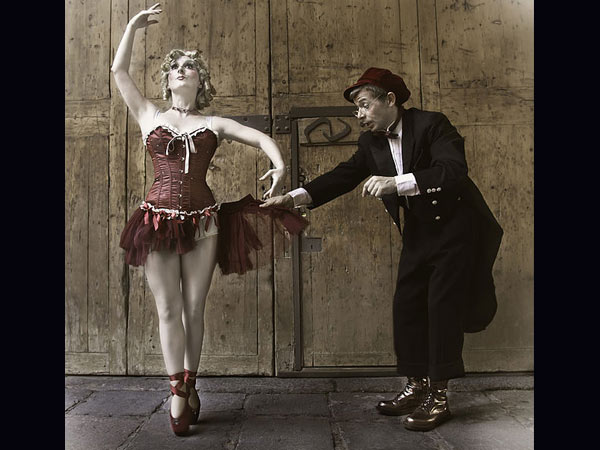 Circle of Two is an international acrobatic-mime duo formed in 1999 by Celia Mendizabal and Ralph Taylor.

Universally appealing and directed to a wide range of audiences, Circle of Two draw inspiration from a wide variety of artistic genres, ranging from classic literary works to the great film-makers of the silent era. Thus they present highly evocative and poetic shows with unique and personal aesthetics.

Both multi-talented and versatile artists Circle of Two is a very adaptable act (and so are their characters) which is easily tailored to your individual event requirements.

Circle of Two is an international circus/physical theatre company formed in 1999 by Celia Mendizabal and Ralph Taylor.

Having both graduated in 2001 by the Central School of Speech and Drama and The Circus Space with a degree in BA (Hons.)Theatre Practice, Contemporary Circus. They are both multi-talented and versatile artists. They have worked together all over Europe in theatre festivals, circus and cabaret for the last twelve years. They are also experienced in teaching circus workshops to people of all ages.

After their first touring seasons in the UK with Giffords Circus, Circle of Two went touring around Europe, performing in circuses as prestigious as Circus Benneweis in Denmark or the permanent circus building in Munich Kronebau. They have been invited to participate in festivals such as Le Festival International du Cirque de Massy in France or the International Festival of Circus Arts of Izhevsk in Russia. They have won the Prize of the Public both in circus and theatre festivals. Their work has been broadcast by national television stations in the UK, France, Italy, Qatar, Spain, Russia and China.

They have performed in street theatre, circus and cabaret for more than twelve years. They are also experienced in teaching circus workshops to people of all ages. They have a variety of shows and acts that include a wide range of performing disciplines such as physical theatre, puppetry and circus.

Circle of Two are very adaptable (and so are their characters), they we can tailor to many different requirements. They can offer a 5 to 10 minute act, a red thread for a show, or two separate acts (ground and trapeze). They can also adapt their characters to different types of venue.

“It is always a great pleasure to watch these two supremely professional artists at work. Their meticulous attention to detail in performance, costume and presentation is quite stunning.”