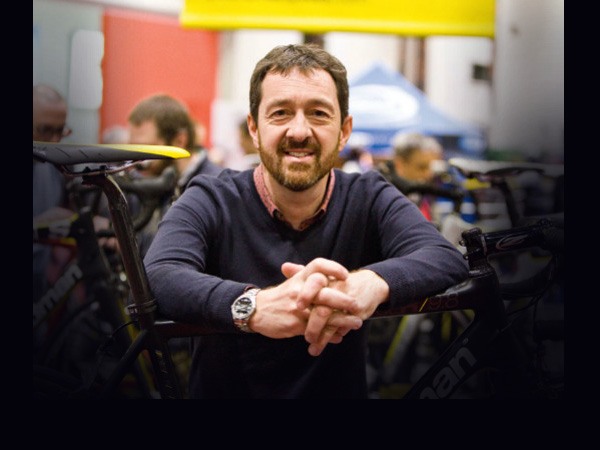 Olympic Gold Cyclist Equipment & Technical Manager for TeamGB Cyclists Chris Boardman is one of Britain’s most successful cyclist of all time. An experienced speaker Chris offers audiences a personal insight into the drive and self-motivation required to become an Olympic champion and how to achieve goals in both professional and private lives.

Chris broke 3 World Hour Records, won an Olympic Gold and was holder of the prestigious yellow jersey in the Tour De France. During his peak Chris was virtually unbeatable in time trials. His number of professional victories has since been beaten by Mark Cavendish, but he still ranks as one of the world’s top time triallists.

Chris Boardman was not just a great cyclist (and one of the greatest time triallist ever) he is also keenly involved in developing bike technology and pushing the boundaries of what was possible to do with a road bike .Throughout his rise from humble beginnings to legendary status Chris not only pushed his body to its limits but through his restless curiosity, pursuit of perfection and cutting edge technology also the machines and products he was using.
An excellent example of this was the Lotus Bike, which helped propel Chris to Olympic Gold in Barcelona 1994. At the time it was a revolutionary design, using a single carbon monocoque frame. It even had only one fork to make it more aerodynamic. The UCI later banned this kind of bike; but, Chris retained an interest in developing bike technology within the framework of UCI regulations. Chris currently has a consultancy job with British Cycling where he looks at ways to gain even the smallest of technological advantages. Chris extensively looks at aerodynamics from outside the cycling, for example the airline industry. It is this ‘thinking outside the box’ which helps find the smallest improvements.

Nothing highlights this philosophy more than the Hour Record. Before the very best of the current Professional ranks attacked the hour record, resulting in Bradley Wiggins achieving 54.526Km, Chris Boardman pushed his body and machine beyond what was considered possible and achieved an incredible 56.375km.

Following his career as a rider Chris applied his knowledge, experience and philosophy to the new generation of Olympians through his role as R&D director at British Cycling. This position led to Chris overseeing the product used by the riders competing in the 2008 Olympics and the record breaking 2012 games in London. He was also one of the main Cycling Commentators during the 2016 Olympics in Rio.

Chris is in great demand at events throughout Europe with his relaxed and professional presentation style making him an ideal choice for any company event.

Better – “People get excited when they believe they can succeed, everyone can understand and measure ‘better than here and now’. Best on the other hand is an aspirational destination that you can’t be sure if you will reach, it also signifies an end point, nowhere else to go… I believe in better.”

Self first – The only thing we can truly control is ourselves, everything else is varying degrees of influence.

Listening – The most important thing we can do is to take the time to truly understand before acting.

Team – Diversity in views, character and background are key to a team achieving its optimum outcome. Such entities are seldom harmonious but are worth the struggle!

I would like to say a huge thank you from everyone at Mars for such an inspiring and thought provoking session today.
Sally Cox
European Management Team – Mars Chocolate
Over the years, I have heard many talks and Keynote speeches from many sportspeople. If I’m being honest, whilst they were invariably very enjoyable, none have made a difference to my life and to my business but Chris’s story is nothing less than inspirational; he shares an ordinary story from an ordinary guy achieving extraordinary results – consistently achieving personal goals and leading a team to achieve team goals. And anyone can apply these ‘ordinary’ things to their business. I know because it’s happening for us and for our clients.

If you get a chance to listen to Chris; be there.

Jack Rowlands
Director, PINNA Ltd
Chris proved a superb choice of keynote speaker at our seminar. We delivered on the brief in an engaging, inspirational and entertaining fashion which really helped us set the tone for the rest of the session.
Richard Hemming
Head of Marketing & Insight, Ebiquity
Excellent, very approachable, spent a long time talking with members of the audience and signing autographs.
Vicky Jackman
NE Worcester College Graduation Evening
Chris Boardman spoke before an audience of 300 at our event in November 2008. He was a true professional and worked hard to tailor his speech to suit the theme of the event and the audience on the day. The result was an engaging, insightful, and informative presentation that delighted the audience and delighted us as clients as his feedback scores were some of the highest we’ve ever seen!
Jenny Coburn
Events Marketing Team, ?What If! Innovation
Chris provided a very motivational session at our annual staff presentation and was not intimidated by speaking to over 350 people. The real differential to other external speakers we have used was the attention to detail – Chris spent some time analysing our business and understanding key issues which were then cleverly interwoven to his speech – something that our Managing Director fully appreciated to reinforce his key messages.
VNeil Fatharly
Prupim
Chris was great to work with – he took the time to really get to grips with the brief and made sure his presentation not only met but exceeded the brief. We received great feedback from delegates who found Chris ‘especially insightful and inspiring.
Toni Diggins
EEDA