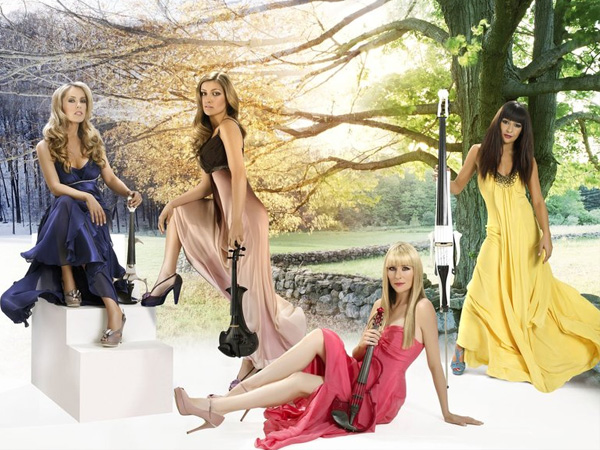 Together Tania Davis (Violin), Eos Counsell (violin), Elspeth Hanson (viola) and Gay-Yee Westerhoff (cello) complete the line-up of BOND.  With energetic and exhilarating live performances around the world, these glamorous ladies take their inspiration from a wide range of genres and are currently recording a new album for release later in 2017, with a tour to follow.

At its launch, BOND was hailed in the press as ‘the Spice Girls of Classical music’, and went onto turn the world of classical crossover music on its head, spawning many electric string groups inspired by its unique sound. Drawing their inspiration from classical, latin, folk, jazz, rock, pop, electro, Indian and middle eastern styles, BOND have built a very active and loyal international fan base over the years and, since its debut, has sold over 4 million albums worldwide, making it the best-selling string quartet of all time.

The musicians, educated to the highest standard at some of the world’s most celebrated music institutions (Royal Academy of Music, Royal College of Music, Guildhall and Trinity College of Music), are pure entertainment, serving up a genuinely genre-defying act willing to explore the joy of music unhampered by cultural hamstrings and language barriers.

Originally four music college students, they decided to break with convention; using their own energetic and compelling approach to performance to become a contemporary and relevant act. As the first truly globally successful classical crossover group they certainly caused a lot of controversy at BOND’s debut. Within a week of its first album hitting number one on the classical charts, it was banned for ‘not being classical enough’. They found themselves the subject of an international news story and a huge debate as to what constituted classical music.  Being the first group of this kind was exciting and that they opened up the classical options for musicians and music students because they pushed the boundaries.

BOND have appeared in most of the world’s major newspapers and magazines and have travelled the globe several times over in sell-out tours. Highlights for them include performing with Pavarotti singing Caruso and playing the Sydney Opera House. They have played in front of the magnificent Giza Pyramids several times, including helping Zaha Hadid celebrate one of her phenomenal buildings. They made their debut at the Royal Albert Hall and have performed at Wall Street and Times Square. They played in Beijing at the Olympics handover, alongside Jimmy Page, Leona Lewis and David Beckham, and four years later performed at the awe-inspiring Olympics closing ceremony in London 2012.