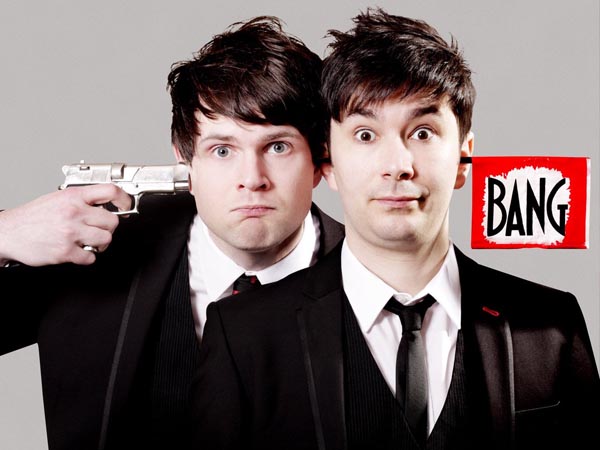 Barry and Stuart are Scottish BAFTA nominated magicians whose, specialist, macabre work has been seen on television and on stage around the world.

Their multi award-winning mix of dark humour and subversive, mind-bending magic has earned the irreverent double act the title of ‘Best Comedy Illusionist’ at the ‘World Magic Awards.’

Darkly funny, Barry & Stuart do the unthinkable, the perfect entertainment to send shiver down your spine and leave you both amazed and confused.

Originally hailing from Aberdeenshire, BAFTA-nominated comedy magicians, and winners of the Best Comedy Illusionist award at the World Magic Awards Barry and Stuart induce séances, cut their arms off with kitchen knives, and swallow audience members’ phones – only to then claw through their own stomachs to miraculously retrieve them.

The Duo made their television debut with the Channel 4 series Dirty Tricks and went on to become the stand-out stars of BBC1’s The Magicians.

With their dark magic at the forefront they caused a national outcry with their Christmas and Easter TV specials – The Magic of Jesus, and Tricks from the Bible – in which the pair visited Egypt to walk on water, raise the dead, and even make a virgin pregnant.

Their three Edinburgh shows have all been sell-out critical successes, and they continue to tour the UK and abroad. They have also created a series of short interactive films in collaboration with the BBC, in which they display and teach psychic powers.