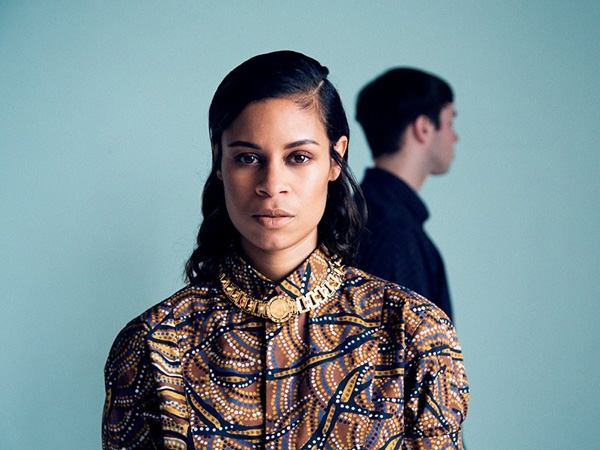 AlunaGeorge are Aluna Francis and George Reid. They met on the internet – while both working on separate projects – and united musically when George remixed ‘Sweetheart’, a song featuring Aluna’s vocals. The track went on to gain love from the likes of Rob Da Bank at Radio 1.

George’s busy electronic production and Aluna’s signature sweet vocals met physically at George’s home studio in Hampton Court, after endless ideas being sent back and forth via email. The first song to be born was ‘Make No Mistake’, which was originally intended for use by a different band – but Aluna and George were so keen on it, they decided to keep it for themselves. AlunaGeorge had arrived.

Together – with influences ranging from Flying Lotus, Hudson Mohawke and Chris Clark to the more late 90s US RnB pastures of Aaliyah, Destiny’s Child and Mariah Carey (the first CD Aluna ever owned) – they’d honed the precise art of creating a new brand of pop music. They began to combine glitchy, wonky sounds, blinding hooks and throbbing basslines into a traditional pop structure. Take a listen to pick apart the elements; the unusual megamix of house-style build-ups, vocals that could easily have been the beating heart of of UK garage’s poppiest moments and intonations from the finest RnB singers of the ’90s. With these facets and the addition of some great big choruses, AlunaGeorge’s songs sound fresh and ever-demanding of the repeat button.

‘We Are Chosen’ mixes two-step and dulcet RnB vibes, bringing memories crashing back to T2, Tina Moore and Shanks & Bigfoot, while the infectious hooks and dancefloor-pop basslines on ‘Make No Mistake’ aren’t easy to ignore; ‘Bad Idea’ combines sleek hip-hop with rhythmic pizzazz and an in-your-face refrain, and there’s plenty more twisted pop to come.