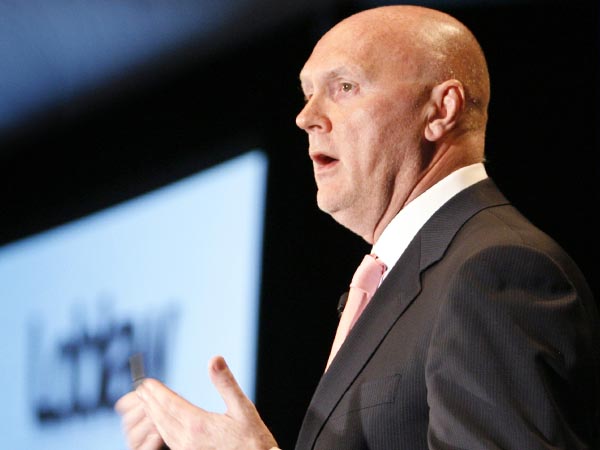 An inspirational speaker, who talks on Leadership, Strategy and Communication.

In the years preceding his portfolio of directorships, Allan rose from Salesman to Marketing Director at Mars,  turned around Asda, before becoming CEO of Wal-Mart Europe, and then moved on to become the CEO of Pandora, the jewelry retailer. His current post as the Non-Executive Chair of Co-operative Group Limited follows Non-Executive Chairman of Royal Mail from 2002 – 2009 and President of Loblaw, the largest food retailer in Canada, 2008 – 2011. In Allan’s major book on Leadership, he draws on numerous experiences portraying an articulate and practical individual.

From humble beginnings Allan Leighton is now one of the most influential men in the business world. His experience ranges from once being a bank cashier, to a salesman to a CEO. The former Chairman of Royal Mail has built a reputation as one of the best managers in Britain.

He returned the postal service to profitability and avoided national strikes. As with any of his organisations, Allan focuses on listening to customers and improving internal communication. He believes in simple strategies: thinking small, putting yourself in the customers’ shoes and focusing on execution.

He has also appeared on a few TV shows, has been seen as a mentor on the Channel 5 show “Breaking into TESCO”. He can tell you his Ten Golden Rules of business which has brought him acclaim and success in every field and job he has been in.

As well as the Royal Mail Group, Allan Leighton is Deputy Chairman of Selfridges and a non-Executive Director of BskyB. He advises Loblaw, Canada’s largest food retailer, and has also served on the board of Dyson, Scottish Power and Lastminute.com, and chaired Race for Opportunity.

Of his Non-Executive Chair at the Co-op, he says; “I grew up with this business, because my father ran the local Co-op, so I have a very real understanding of the importance of The Co-operative to local communities and a strong sense of what the Society stands for.”