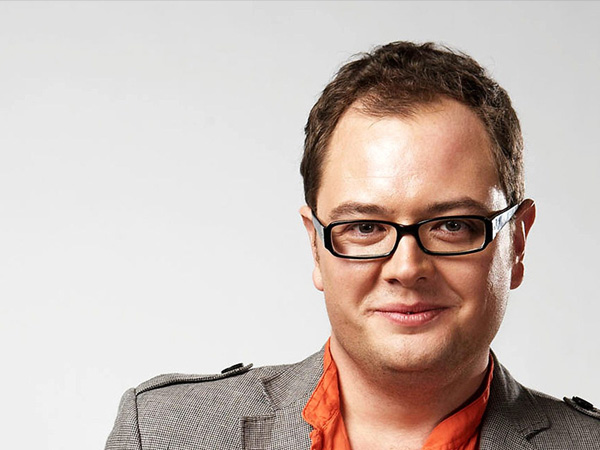 Alan Carr is one of Britain’s most successful and much loved comedians, his unique humour and effortless stage presence on screen and on tour, make him part of the backbone of British Comedy.

Following the success of his previous autobiography the Sunday Times Bestseller, “Look Who It Is!” which sold over half a million copies, Alan’s new memoir “Alanatomy” was published in 2016.

Alan’s been described as ‘the spiritual son of Frankie Howard’ (City Life). His formative years were spent working in a supermarket as well as a call centre for lost and stolen credit cards. In 2002, his Edinburgh Festival show ‘Me ‘Ead’s Spinnin’ earned a four star review in Edinburgh bible, The List as well as the The Daily Telegraph’s Critic’s Choice. There were no surprises then, in 2003, when ‘I Love Alan Carr’ was rated a four star show in both the The Scotsman and The Independent, but it was at the Edinburgh Festival in 2005 that things really started to happen for our Alan. He earned five star reviews across the board in The Independent, The Scotsman and Three Weeks as well as numerous ‘Pick Of The Fringe’ accolades. It was here that Alan came to the attention of the Channel 4 bigwigs.

Alan has gone from strength to strength appearing at comedy festivals all over the world, Melbourne, Montreal’s ‘Just For Laughs’ and Kilkenny as well as touring the length and breadth of Great Britain with his ‘Tooth Fairy’ tour culminating in a three night sell-out run at the Hammersmith Apollo. Alan doesn’t just perform for commoners, he has performed for her Majesty The Queen at the Royal Variety Performance too.