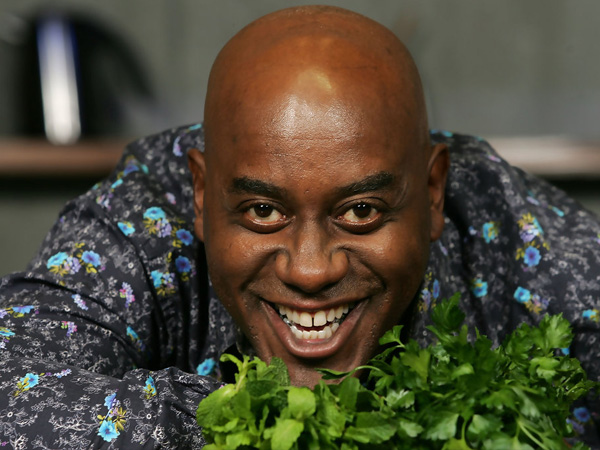 Create energy at your next event by including one of the country’s favourite TV chefs, Ainsley Harriott.

His irresistible charm and powerhouse enthusiasm takes audiences by storm and after almost two decades he has become something of a national institution. Best known for his twenty-one series of Ready, Steady, Cook, and with many solo primetime cooking series under his belt, he has become the master of fresh, fun, accessible cuisine, and with his many years of experience working in television and in professional kitchens, he has developed a deep understanding of his craft and delivers a fun experience every time.

Ainsley trained at Westminster College before a career in London’s top hotels and restaurants – In the early 1990s he was invited to become resident chef on BBC TV’s Good Morning With Anne And Nick. This in turn led to Ready, Steady, Cook and his TV career took off. His television credits include series of: Ainsley’s Barbeque Bible, Ainsley’s Meals in Minutes, The Hidden Camera Show, Ainsley’s Gourmet Express in the UK, The Ainsley Harriott Show,  Ready, Set, Cook for the US and Off The Menu, for South Africa.

He is also a best-selling author and has sold over two million books worldwide. Titles include Ainsley’s Barbecue Bible, the Meals in Minutes franchise and Friends and Family.

Ainsley’s own food range has gone from strength to strength and is now a familiar sight in the UK.