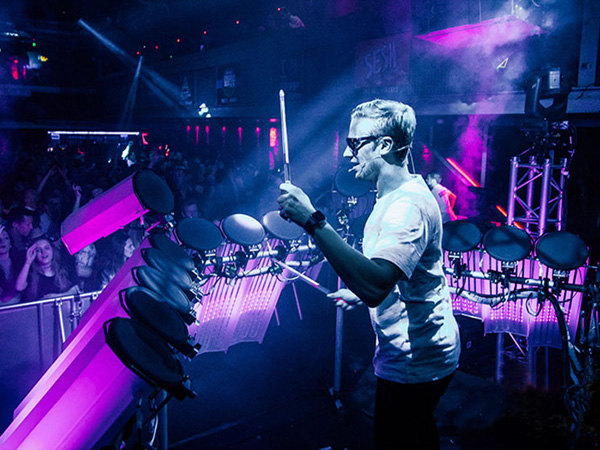 DJ AFISHAL combines drumming, music and visuals in his powerful live show! He remixes music on the fly whilst simultaneously triggering incredible live graphics – all completely live! This Visual DJ Show is revolutionizing the EDM scene, already racking up millions of views on YouTube.

AFISHAL is a true pioneer in the world of electronic music. A relentless drive to innovate, natural talent for drumming and his passion for music culminated in the birth of Visual DJ’ing.

He’s enjoyed huge success off the back of several viral hits like his remix of Avicii’s Without You which is currently at 29-million plays and counting!

The hard graft has certainly paid off – partly in the form of collaborations with titans like Afrojack, DJ Fresh, Spinnin’ Records, No Copyright Sound and even Netflix!

Afishal has delivered show-stopping performances to 20,000 ravers at TechFest as well as broadcasting live to 120-million viewers from a 25,000 cap stadium in China – so it goes without saying this Visual DJ’s know how to move a crowd!

The Visual DJ Show’s greatest strengths is its versatility! The AFISHAL team has secured a reputation as industry leaders when it comes to bespoke productions. They’ve created custom performances for likes of TikTok, UEFA, Bentley, United Airlines and Marriott Hotels.

The HD TREMOR is the latest and greatest evolution of AFISHAL’s live Visual DJ Rig and the most impressive Visual DJ setup on the planet.

The HD TREMOR is the latest and greatest evolution of AFISHAL’s live Visual DJ Rig. It enables AFISHAL to perform music live and remix on the fly in the most visually rich experience ever seen on stage So, how does it work?

When he strikes each pad, it triggers a pre-programmed sound and graphic. The music you hear is matched by the incredible visual show, all produced by the AFISHAL team.

This Visual DJ Rig is made up of HD LED Video panels, giving AFISHAL the ability to display any pattern, image or animation across The TREMOR, meaning that audiences can literally see the music being created and performed right before them!