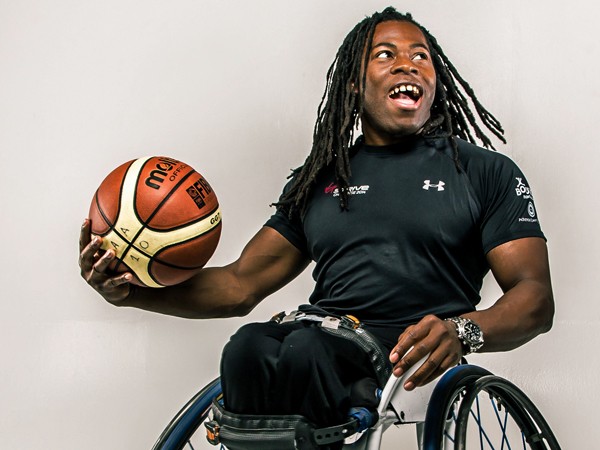 Adedoyin Adepitan. Or Ade to his friends and the public, was born in Lagos Nigeria. At the age of fifteen months he contracted Poliomyelitis. The effects of the virus meant that Ade was unable to use his left leg, and only had partial use of his right leg.

With a variety of high profile speeches including the launch of the London’s Olympic bid 2012 and for businesses including The Royal Mail, BUPA, NSPCC, Lloyds TSB and BT, Ade has proved to be a highly sought after motivational and Olympic speaker. An equally talented presenter, he has a wealth of recent high profile TV experience including  Rio Paralympic coverage, The Travel Show and Children in Need.

His epic four-part journey around Africa is being broadcast in 2019 on the BBC ‘Africa with Ade Adepitan’.

In 1976, when Ade was three years old his parents decided move to the UK. They settled in Plaistow East London. Ade discovered wheelchair basketball when he was twelve, after being spotted by two Physiotherapists. They saw Ade as he was pushed through the streets of Plaistow in a Tesco’s shopping trolley by his friends. The shopping trolley was quickest way to get around at the time, and it was the easiest way to keep up with his friends. Owen McGhee, and Kay Owen, we’re both Physiotherapists who worked in East London and their Philosophy was to teach and motivate young disabled children in the area, to be independent using sport. After taking Ade to Stoke Mandeville in Buckinghamshire, they introduced him to wheelchair basketball. This was a life changing and inspiring moment in Ade’s life and one that would help create a very different future for the boy from Plaistow.

After turning down an opportunity to study and play basketball, at the University of Illinois in Chicago. Ade decided to play basketball professionally for two years with CAI CDM Zaragoza. His dream to play for Great Britain at the Paralympics finally came true. After fifteen years, Ade was selected to compete in the Sydney 2000 Paralympics.

The Sydney Paralympics got good media coverage; this helped to boost Ade’s Profile amongst the British public. After starring in a documentary called “hoop dreams” for a cable channel, and also featuring in the world famous PlayStation double life advert, as well as presenting a wildlife show on national TV. Ade Adepitan became a familiar face in the UK with his trademark cheeky grin and flowing dreadlocks.

One of the tournaments highlights came in the quarterfinals. Trailing by one point against the World champions the USA, and with seven point one seconds left in the game. Ade was fouled in the act of shooting, and was awarded two free throws. He sunk both shots to seal an amazing victory. Seven months later he did it again, this time at the inaugural Paralympic world cup in the final against Australia. In Overtime Ade hit the winning shot to beat Australia and help his team win Gold.