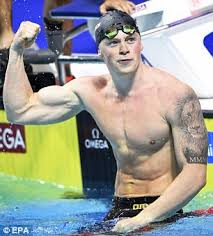 Adam Peaty MBE is both an Olympic and World Champion as he continues to dominate and lead the way in Men’s international Breaststroke.

In 2017, Peaty became the most successful British male swimmer at any World Championships after claiming a fifth global title in the Hungarian capital of Budapest and a total personal haul of three medals.

Peaty broke the world record twice on the way to the 50m Breaststroke title, becoming the first athlete ever to go sub 26 seconds. He also took the global title in the Men’s 100m Breaststroke and rounded his week off with silver in the Men’s 4x100m Medley relay on the final race of the Championships.

He made history at the Rio 2016 Olympic Games as he not only became the first member of Team GB to take gold in Brazil but the first male Olympic Champion in the pool since 1988, as he won the Men’s 100m Breaststroke title.

Adam was subsequently awarded Best Male Swimming Performance of the Rio 2016 Games by FINA after his impressive win that saw him breaking his existing world record in the heats and then again in the final by almost a second.

The Olympic Champion had the home crowd on its feet as he stormed to 100m Breaststroke victory on day one of the British Swimming Championships. He backed up his excellent performance with another blistering swim in the 50m Breaststroke to claim his second gold medal.

Peaty also contributed to the impressive silver in the men’s 4x100m Medley Relay, lowering the previous 100m Breast split by more than a second and left Brazil as GB’s most decorated swimmer.

The European Championships in the May of 2016 were a great warm-up and a sign of things to come for Peaty as he claimed four titles including two individual in the Men’s 50m and 100m Breaststroke.

At the 2015 World Championships in Kazan, Russia Peaty took gold in the 50m and 100m Breaststroke events as well making up one-quarter of the winning British 4x100m mixed medley relay team which also broke the World record for a second time.

Finally bringing the season to a close with a first senior Championship appearance, setting personal bests in all three breaststroke events at the European Short Course Championships in Herning.

His first taste of international experience came with a couple of final berths on the 2012 FINA World Cup circuit.