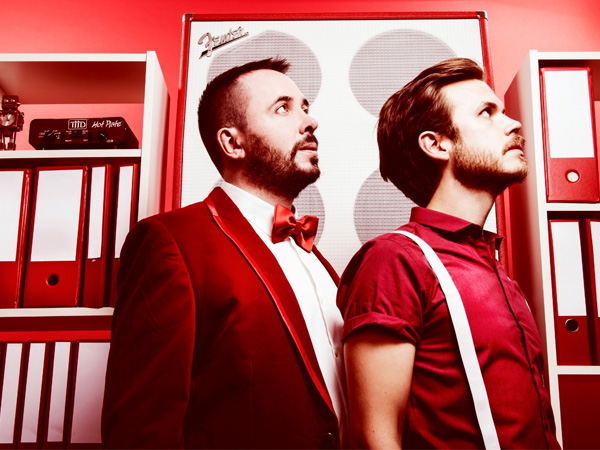 They have appeared on 8 Out of 10 Cats Does Countdown, The Al Porter Show (RTE), The Ray D’Arcy Show (RTE), BBC3′s Live at the Edinburgh Fringe Festival, BBC2′s The Stephen K Amos Show, on Sky Arts as part of their Latitude coverage and many radio shows, including BBC Radio 1′s Fun And Filth Cabaret, alongside Paloma Faith and Nick Grimshaw.

Winners of the Hackney Empire New Act of the Year, Musical Comedy Awards and the Adelaide Fringe Festival “Best Comedy – Newcomer” award, Abandoman create musical songs and sketches at lightning speed based on audience interaction.  Come to the show, drop your suggestions in the ring and watch as Abandoman make musical magic. No two shows will ever be the same.

The last four years have seen Abandoman tour with multi-platinum artist Ed Sheeran, headline comedy stages at every major UK music festival (including Glastonbury, Latitude, Bestival, Leeds & Reading), host London’s St Patrick’s Day event to over 15,000 revellers in Trafalgar Square, and be named out of over 2000 acts as the Sunday Times’ “Best Musical Act” of the Edinburgh Fringe Festival 2014.

Abandoman perform extensively in both the UK and abroad. They have sold out runs at the Adelaide Fringe Festival, and this year will perform in Hong Kong, America, and numerous destinations in Europe. Their most recent show, “Hot Desk” sold out two years in a row to a capacity audience at one of the Edinburgh Festival’s largest venues, and has since toured all over the world.

“Abandoman were unbelievable – truly incredible.  Already looking forward to the next time I can book them!  Same goes for many of my colleagues who came just for the evening event – they were super impressed”.

It was lovely meeting and seeing them in action! The crowd loved them – I became a bodyguard at the end of the night and had to pull them away from people for photos!

They were both totally open to any feedback, really took it on board and smashed it! Very funny duo”

“Stars of the future!”

“A freestyle talent that is unparalleled anywhere in the market. No two shows could ever be the same as they pick out audience members and freestyle about them, with comedic timing and witty rhyming that’s so impressive it could’ve been scripted.”

“I’ve yet to see an audience not go nuts”

“As inspiring in its simplicity as it is mind-blowing in its complexity; a must see.”

“Flight of the Conchords meets 8 Mile… Nothing short of genius.”

“The most original act we’ve seen in a long time. Go and see them.”

“Impressive and thoroughly entertaining”, “An hour with the Abandoman boys is like pure sunshine, be prepared for your face to ache from laughing and your hands to sting from clapping so hard.”  ★★★★

“Stole the show…a revelation and a first in live comedy”